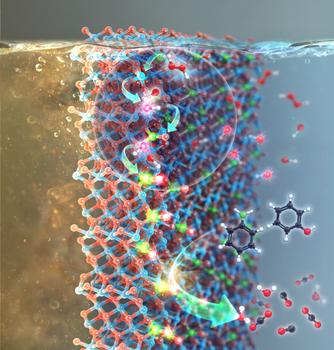 Graphic image of the research

NOX (X=1 or 2) emitted from stationery/mobile sources are conventionally deemed as notorious, anthropogenic precursors of ultrafine particulate matters (PM2.5) because NOX can undergo a series of SO2-assisted photochemical transformative stages to finally evolve PM2.5 functioning as an air pollutant. Recently, a research group in South Korea rectifies the general notion of NOX (vide supra) by proposing an interesting means to exploit NOX in creative fashion.

The Korea Institute of Science and Technology (KIST) has announced that a KIST research group with principal investigators of Dr. Jongsik Kim and Dr. Heon Phil Ha has collaborated with a research team led by Prof. Keunhong Jeong in the the Korea Military Academy (KMA) to graft NO3- species on a metal oxide via chemical fusion between NOX and O2 under a low thermal energy (≤ 150 °C). The resulting supported NO3- species can then be radicalized to generate NO3• analogues that serve as degraders of refractory organic substances present in a wastewater.

Aqueous recalcitrant compounds including phenolics and bisphenol A are typically eliminated from water matrices via sedimentation with the use of coagulants or via degradation into H2O and COY (Y=1 or 2) with the injection of OH shuttles such as H2O2, O3, etc. However, these methods require additional stages to recover coagulants or suffer from short lifespans and/or chemical instabilities innate to •OH, H2O2, and O3, thus severely limiting the sustainability of H2O purification processes currently being commercialized.

As a substitute of •OH, NO3• can be particularly appealing due to its longer lifetime and/or greater oxidizing potential in comparison with •OH, •OOH, or O2•-, thereby being predicted to enhance the efficiency in degrading aqueous pollutants over the other radicals stated above. Nevertheless, NO3• production is not trivial and has a bunch of constraints such as the need of highly energized electrons in the presence of a radioactive element or highly acidic environments.

Dr. Kim and co-workers make it viable under a wastewater including H2O2 and NO3--functionalized manganese oxide that surface manganese species (Mn2+/Mn3+) initially activate H2O2 for the formation of •OH, whereas •OH subsequently activates NO3- functionality for its transition into NO3• (denoted as •OH → NO3•), all of which are evidenced by density functional calculation (DFT) techniques alongside with a bunch of control experiments.

The resulting NO3• species were demonstrated to escalate degradation efficiency of textile wastewater by five- or seven-fold compared to those provided by conventional radicals (•OH/•OOH/O2•-). Of significance, the catalyst (NO3--functionalized manganese oxide) discovered herein is ~30 % cheaper than a traditional commercial catalyst (iron salt) and is mass-producible. Of additional significance, the catalyst is reusable ten times or more. This is in contrast to a traditional catalyst that only guarantees one-time utilization in decomposing aqueous pollutants via homogeneous H2O2 scission (•OH generation).

Dr. Kim remarks that “The •OH → NO3• technology has been patented and sold to a domestic company (SAMSUNG BLUETECH). Given a plenty of merits imparted by the catalyst modified with NO3- functionalities, we basically expect to install the catalyst in a wastewater treatment unit so soon.”