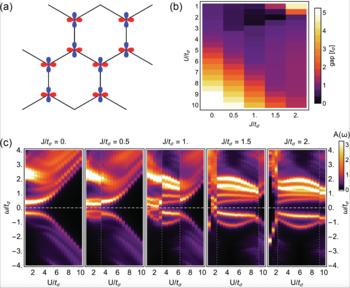 A team of researchers from Germany, China and the United States has discovered that two twisted layers of MoS₂ can be used to control kinetic energy scales in solids. In addition to using the twist angle to control the material’s electronic properties, the researchers have also now demonstrated that the electrons in MoS₂ can interfere destructively, stopping their motion for certain paths. This property makes it possible to engineer exotic magnetic states.

The work by scientists from the Max Planck Institute for the Structure and Dynamics of Matter in Hamburg, RWTH Aachen, the University of Cologne, Songshan Lake Materials Laboratory, the Center for Computational Quantum Physics (CCQ) in New York, and the University of Pennsylvania has been published in Nature Communications.

In recent years, two-dimensional (2D) materials stacked at a relative twist to each other (known as ‘twisted van der Waals materials’), have revolutionized condensed matter research. Depending on the relative twist angle, the crystal lattices form a larger interference pattern – a so-called moiré pattern – which can change the electronic wave functions in solids. “These twisted materials are fascinating as they can be used to engineer novel electronic properties with unprecedented flexibility,“ explains Lede Xian, the lead author of the study. “This is due to fact that the twist angle offers an effective way to hinder the mobility of the electrons.“ Recently, this effect was deployed successfully to demonstrate twist-angle controlled superconductivity, insulating behavior and even more exotic phenomena such as anomalous quantum Hall phases. This breakthrough has triggered an avalanche of research works on the fascinating subject of engineering novel solid state properties using twist, many of them pioneered at the MPSD.

Now, however, the international research team has moved a new two-dimensional material into the spotlight: MoS₂, or molybdenum disulfide. “The novel and quite surprising aspect in twisted MoS₂ is the fact that quantum interference can modify the electronic properties of solids even further,“ says Dominik Kiese, a PhD student at the University of Cologne. “We have unraveled that at least for certain electronic states the motion of the electrons in twisted MoS₂ can interfere in such a way that they effectively stop moving almost entirely.” This new effect comes on top of the engineering opportunities offered by twisting. It is akin to the behavior found in prototypical models such as the Lieb lattice which have garnered tremendous attention in the past, but have been difficult to realize in solids until now. By using the MoS₂ layers’ twist and tuning into a regime dominated by correlations, it becomes possible to access novel states of matter such as exotic types of magnetism. It is a new and different way to engineer electronic properties, as the research team has demonstrated.

“We showed that moiré engineering can be used to provide a condensed matter-based platform for yet another class of prototypical model Hamiltonians,” says Dante Kennes, professor at RWTH Aachen University. Given the profusion of materials to choose from, many novel effects might still await discovery, adds MPSD Theory director Angel Rubio: “These materials are so versatile, exhibiting very different types of electronic or structural properties, interaction or spin orbit scales as well as lattice geometries, that we are clearly only at the beginning of a long and exciting journey to explore their full potential. The team’s work provides an important step along this path.”