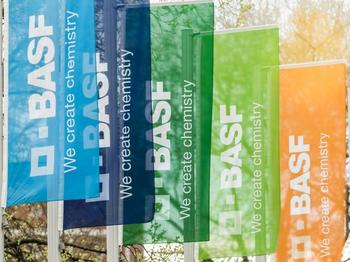 BASF Group’s strong business development continued in the third quarter of 2021. Demand for BASF’s products remained solid over the summer months. “This enabled us to continue to grow profitably,” said BASF’s Chairman of the Board of Executive Directors, Dr. Martin Brudermüller, who presented the results of the third quarter together with Chief Financial Officer Dr. Hans-Ulrich Engel. “Compared with the third quarter of the previous year, we increased prices by 36 percent and volumes by 6 percent,” Brudermüller said.

At €19.7 billion, sales were €5.9 billion higher than in the prior-year quarter. This was largely attributable to higher prices in all segments, especially in Chemicals, Surface Technologies and Materials. The sales growth was also due to a significant increase in volumes in almost all segments.

At €1.9 billion, income from operations (EBIT) before special items was €1.3 billion higher than the level of the third quarter of 2020. This was mainly driven by the significantly higher EBIT before special items in the Chemicals segment. The significant earnings increases in the Materials and Industrial Solutions segments as well as in Other also lifted earnings. By contrast, earnings contributions from the Agricultural Solutions, Surface Technologies and Nutrition & Care segments declined considerably. “With strong earnings contributions from the Chemicals and Materials segments, the earnings mix in the third quarter of 2021 was comparable with the second quarter of 2021,” said Brudermüller. “Our downstream businesses are still confronted with further rising raw material, energy and freight costs. Price increases in most downstream businesses could only partially offset these higher costs.”

EBIT amounted to €1.8 billion, considerably above the figure of minus €2.6 billion reported in the prior-year quarter. This figure includes income from integral companies accounted for using the equity method, which rose by €144 million to €200 million, due largely to the higher earnings contribution from BASF-YPC Company Ltd., Nanjing, China.

The global economy continued to recover in the third quarter of 2021 following the sharp decline in economic activity in the previous year. However, growth momentum slowed compared with the previous quarter due to supply bottlenecks in many value chains of the manufacturing sector. Further pandemic-related disruptions in production and logistics in Asia intensified the scarcity of precursors worldwide. The global automotive industry was especially affected by a chip shortage that led to significant drops in production. In addition, power cuts in some provinces of China had a negative impact on production, especially in energy-intensive industries. Global demand for consumables and consumer durables remained stable despite the burden of rising energy prices on companies as well as on end users.

BASF assumes that supply bottlenecks will continue to negatively impact global economic recovery in the fourth quarter of 2021. The assessment of the global economic environment in 2021 has therefore been slightly adjusted (figures for industrial and chemical production rounded to the nearest half percentage point; previous forecast in parentheses):

Based on the BASF Group’s sustained good business performance and the anticipated continuation of solid demand, especially in the Chemicals and Materials segments, the forecast for the 2021 business year was raised in accordance with market expectations (previous forecast from the Half-Year Financial Report 2021 in parentheses):