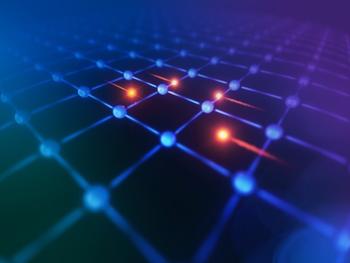 A four-part electron family creates a completely new state of matter in a metal. Researchers from the Dresden-Würzburg Cluster of Excellence ct.qmat have demonstrated this unusual phenomenon for the first time worldwide.

An international research team from the Cluster of Excellence ct.qmat-Complexity and Topology in Quantum Matter has demonstrated a completely novel state of matter in a metal. It is created by the combination of four electrons-until now, only electron pairs were known. This discovery could lead to a new type of superconductivity, an entirely new research direction, and revolutionary technologies such as quantum sensors.

Dissipationless electric energy transport–also known as superconductivity–is seen as a beacon of hope for the energy industry. Since its discovery more than 100 years ago, scientists around the world have been investigating this well-known quantum phenomenon, which, however, requires the electrons in metals to be cooled to ultra-low temperatures. A team of scientists from the Cluster of Excellence ct.qmat–Complexity and Topology in Quantum Matter at the Universities of Dresden and Würzburg has now made a remarkable discovery: In certain superconducting metals, a compound of four electrons ensures that a completely new state of matter is created. Until now, only electron pairs were known to play a role in superconductivity. The discovery by the research team led by Prof. Hans-Henning Klauss of Technische Universität Dresden is therefore considered a milestone for materials research. The research results have been published in the journal Nature Physics.

In quantum physics, superconductivity, discovered as early as in 1911, is probably the best-known phenomenon to date. Its theoretical foundations are understood since the 1950s. It is essential that electrons at ultra-low temperatures no longer move through a metal individually, but as pairs. Electron pairs do not collide with the atomic lattice, so that they can transport their charge without any loss of energy.

When the Dresden researchers led by Henning Klauss experimentally investigated the superconducting metal Ba1-xKxFe2As2 from the class of iron pnictides, they initially suspected a mistake: "When we discovered that suddenly four electrons instead of two were forming a bond, we first believed it was a measurement error. But the more methods we used to confirm the result, the clearer it became that this had to be a new phenomenon: all data are consistent with the same result. Now we know that the four particle electron family in certain metals creates a completely new state of matter when cooled to ultra-low temperatures. What this will lead to in the future will become clear over the next few years," comments Dresden physicist Hans-Henning Klauss.

Already about ten years ago, it was theoretically predicted that there could be an unusual state of matter in certain superconducting metals, in which four instead of two electrons play a role. The international research team of the Cluster of Excellence ct.qmat has now provided the first experimental evidence. It was scrutinized for two years using seven different methods.

"We first discovered the new state of matter in a Swiss particle accelerator. We were then able to confirm our results with six other methods on site in Dresden and at Stockholm University. The great location advantage of Dresden is the short distances: I can bring my sample almost on foot to a Leibniz Institute or Helmholz Center," emphasizes the project's lead experimenter, Dr. Vadim Grinenko of TU Dresden. The theoretical interpretation of the measurement results comes from the Swedish physicist Prof. Egor Babaev.

The discovery of iron pnictides as a class of materials particularly suitable for superconductivity already triggered a worldwide research boom in physics and materials science starting in 2008. The energy industry has high hopes for the popular quantum phenomenon because up to 15 percent of energy is lost in conventional energy transport due to transport resistance. "If you could actually transport electricity across the country in superconducting metals at room temperature, about ten large power plants would be superfluous right away," says Klauss. However, basic research–such as Prof. Klauss'–is concerned with understanding the underlying physics and can at best speculate about future applications.

"One can assume that our results will lead to a whole new line of research, looking for other metals with four connected electrons, for example, or exploring how materials need to be changed to create an electron family," Klauss explains. "In purely theoretical terms, a whole new type of superconductivity would also be possible with our electron family. The only thing that is certain is that iron pnictides are well suited for technologies such as quantum sensors due to their new aggregate state."