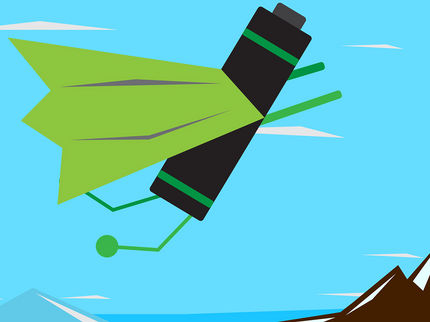 For America to move fully away from fossil fuels and to a more sustainable energy economy, batteries are the key ingredient. For both electric vehicles and the power grid, new battery technologies will transform the energy equation behind how we live and how we move.

As part of this effort, the Joint Center for Energy Storage Research (JCESR), an energy innovation hub located at the U.S. Department of Energy’s Argonne National Laboratory, has taken up the battery cause for over 10 years. The research at JCESR has produced breakthroughs that have found their way into electric vehicles as well as lead the creation of several spinoff companies.

One of these companies, Sepion Technologies, has formed to make real the promise of an innovative battery chemistry. The heart of Sepion’s technology is a battery membrane, which separates the two electrodes of a battery. These membranes are especially useful for energy-dense lithium-metal batteries.

Sepion recently secured Series A funding — its first significant round of outside venture capital investment. With the additional capital, Sepion will expand its staff from 10 to 30 people and open a new pilot facility.

“When I was a part of JCESR, we were all thinking about what the future of batteries could possibly look like, and now I’m excited to be a part of it by making real the promise of lab technology in industry,” said Sepion co-founder Peter Frischmann.

“We’ve always had as our mantra that we want to be able to understand electric battery phenomena at the atomic and molecular level so that we can purpose-design batteries for a specific application,” added JCESR Director George Crabtree. ​“Now companies are coming out of JCESR to fulfill that mission.”

Membranes are crucially important for batteries because they selectively allow charge-carrying ions to move from one side of the battery to the other. Membranes allow a wide variety of batteries to work, from lithium-ion batteries for electric cars to large flow batteries that can be used to store energy on the grid.

“Membranes have always been viewed as a key component to enable next-generation batteries,” Frischmann said. ​“Our membrane research has evolved as we sought to discover which batteries would have the most transformative impact.”

Frischmann gained entry to the National Science Foundation’s I-Corps program, in which he learned the skills needed to become a successful entrepreneur and paved the way for Sepion. ​“JCESR was the launching point for our technology as well as other battery technologies that are advancing toward commercial success,” Frischmann said.

“Start-ups play a special role — they have a pressing existential concern from the get-go,” Crabtree added. ​“They operate in a very different way from big companies — they’re always looking for the next opportunity which means they have to be more aggressive, creative, and out there.”

In the I-Corps program, Frischmann realized that his initial game plan — creating membranes for lithium-sulfur batteries — was an overwhelming challenge for a startup. It necessitated a more comprehensive battery overhaul that would have required a long-term commitment as well as large amounts of capital. ​“When we were looking at lithium-sulfur batteries, we needed to change the whole battery system, including both electrodes of the battery,” Frischmann said. ​“By focusing on lithium-metal batteries instead, we can keep the cathodes the same as in well-validated lithium-ion batteries, and focus our attention entirely at the anode.” A battery has two electrodes, a positively charged cathode and negatively charged anode, between which lithium ions shuttle.

Lithium-metal batteries use anodes formed of pure lithium metal. They offer a greater amount of energy for every pound than their lithium-ion relatives, making them an attractive option for extending range for applications like electric vehicles and aircraft. ​“Improving battery performance while lowering cost is imperative to accelerate the transition to sustainable transportation,” Frischmann said.

The principal drawback of lithium-metal batteries lies in their relative instability. As the battery charges and discharges, long needles of lithium tend to form on the anode surface and stretch towards the cathode. If these one-dimensional needles, called lithium dendrites, become too long, they can impair battery performance or even short a battery out.

The key to improving the performance, safety and reliability of lithium-metal batteries, Frischmann realized, lay in making the lithium metal deposits grow in a different way. By using the nanoporous membrane he had created as part of JCESR near the anode surface, he and the Sepion team were able to flatten the previously branching dendrite needles. ​“Instead of a spike, we were able to create a pancake, which is much better for battery performance,” he said.

With these new membranes and a focus on electrified mobility applications, Sepion gained entry to Cyclotron Road, a Lawrence Berkeley-based incubator. Cyclotron Road seeks to move lab research to the marketplace through startups. This two-year intensive program provided Frischmann with one of the most formative experiences of his career. ​“Cyclotron Road really taught me to think differently about how I talk about science and how I think about batteries,” he said.