"We can now offer ultra-low power OLED microdisplays that not only display simple information in yellow, but also convey additional information in the signal colors red and green" 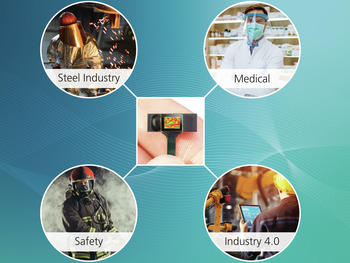 Scientists at the Fraunhofer Institute for Organic Electronics, Electron Beam and Plasma Technology FEP have succeeded in realizing a multicolor OLED microdisplay that consumes the lowest power of all available microdisplays with an extended range of applications compared to monochrome displays. This OLED microdisplay was realized within the "Backplane" project funded by the Saxon State Ministry of Economic Affairs, Labour and Transport (SMWA, funding reference: 100392259). It will be presented at CES, January 05 – 08, 2022, in Las Vegas/USA, at the joint booth of the Organic Electronics Association (OE-A), No. 51139, at the Venetian Expo Center.

Wearables have become extremely widespread. Used as fitness wristbands, they measure body values during sports. In the industry, you no longer need cumbersome manuals. Instead, the data is displayed directly via smart glasses. Navigation while cycling is barely visible in the form of a tiny system that is located directly in front of the eye and guides us where we want to go. Of course, these systems have to consume very little power, because you don't want to get off your bike and recharge it in between.

The ultra-low power microdisplay platform for wearables, which is available from Fraunhofer FEP, is therefore designed for extremely low power consumption and is based on the proven OLED-on-silicon technology. These OLED microdisplays were previously only available in monochrome, which was sufficient for simple information displays at first. In order to expand the range of applications, a multicolor OLED microdisplay has now been researched within the "Backplane" project, which can display the color space of green, red and their mixed colors, and still requires less power than all other microdisplays.

"We can now offer ultra-low power OLED microdisplays that not only display simple information in yellow, but also convey additional information in the signal colors red and green, for example as a warning display in firefighters´ helmets or for professional divers," explains Philipp Wartenberg, department head IC and system design at Fraunhofer FEP. "The presentation of sensor data can also be fast and vivid. For example, a welder can always follow the thermal image at a weld seam, or a nurse in protective clothing with integrated sensors can immediately see if the patient has higher temperature. Visualizing heat differences was not possible with the ultra-low power microdisplays that were previously offered."

Wartenberg and his colleagues created an innovative display concept that allows multi-color and higher data rates by reducing the pixel size by half, is also extremely power-efficient, and is manufactured in the hitherto used CMOS technology.

The scientists are now looking forward to discussing the possibilities of the new display generation with industrial customers and adapting them to their requirements. The tiny ultra-low power OLED microdisplays enable extremely compact systems.