Snapshots from the quantum world 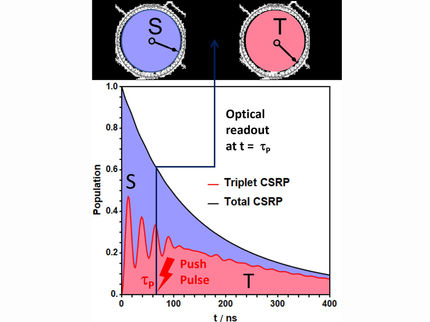 Basic diagram of the experiment. The charge-separated radical pair (CSRP, black curve) decays within about 1000 nanoseconds by recombination of the electrons to singlet or triplet product. Here, the dynamic alternation of the CSRP between singlet (S) and triplet (T) state is recorded only averaged over the total reaction time. Using the pump-push-pulse technique, singlet and triplet character of the CSRP can be read out at any time.

The alternation between singlet and triplet states of electron pairs in charge-separated states plays an important role in nature. Presumably, even the compass of migratory birds can be explained by the influence of the geomagnetic field on the magnetic interplay between these two spin states. Until now, this quantum process could not be followed directly optically and only be evaluated summarily in the final product. In the current issue of the journal Science, a research collaboration with Professor Ulrich Steiner from the University of Konstanz and researchers from the Universities of Würzburg and Novosibirsk (RUS) presents the pump-push-pulse technique, allowing for the first time to optically determine the time course of the singlet/triplet ratio. This opens up new avenues, for example in the field of organic solar cells, but also for qubits in quantum computers.

Normally, electrons in a molecule occupy the quantum theoretically allowed orbits pairwise. The property of the electrons’ intrinsic angular momentum, their spin, is of pivotal importance here. According to the Pauli exclusion principle of quantum mechanics, two electrons can travel along the same orbit only if their spins are antiparallel. If one electron rotates clockwise, the other must rotate counter-clockwise. In the molecular ground state, usually all electron spins are paired. By light excitation, a single electron is detached from the paired constellation and lifted to an energetically higher level, where it occupies a free orbit alone. From here, it can then jump to a free orbit in a suitable neighbouring molecule. The result is photo-induced electron transfer. The two separated electrons can now change their spin settings independently of each other through magnetic interaction with their respective surroundings, as they are no longer constrained by the Pauli principle.

Such charge separation by photo-induced electron transfer also takes place e.g. in photosynthesis. The energy of the transferred electron decreases only slightly during this step, so that most of the electronic energy initially absorbed through the light excitation is still retained. This original excitation energy is thus stored in chemical form. In chemistry, the charge-separated state with the two lone electrons is also known as a radical pair. If the spins of the two separated electrons are aligned in parallel, we speak of a triplet state; if their alignment is antiparallel, we call this a singlet state of the radical pair. Due to the free individual evolutions of the two spins, the spin state of the radical pair alternates between singlet and triplet state. Since there is not much difference between these spin alignments in terms of energy, until now they were not directly distinguishable optically.

Energy stabilisation of the radical pair can be achieved by the radical electron jumping back from the acceptor molecule to the donor molecule, whereby the original singlet state is restored, releasing energy in the form of heat. However, to be able to  pair again with the original partner electron, its spin must have remained opposite to that of the latter, which is not necessarily the case, as spin reorientation may have occurred in the meantime. If its current alignment is different, it cannot return to its original orbit, but alternatively it can release energy by transitioning into another, lower orbit that is still free. This results in a triplet product that can be optically distinguished from the singlet product.

The phase in which the radical pairs oscillate between singlet and triplet state is of particular interest in many respects. Since it is a coherent motion governed by quantum mechanics, it can basically be controlled, for example by an external magnetic field. Such motions are used e.g. in physics to implement quantum computers. “Our radical pair can serve as a model for qubits, as they exist as elements in quantum computers, or for understanding the function of radical pairs in the biological compass model of migratory birds mentioned above. For such reasons, it is of interest to know how the spin is currently positioned in this process,” says Ulrich Steiner, whose research fields are photokinetics and spin chemistry.

With the “pump-push-pulse” technique, the research collaboration has developed a procedure that makes it possible for the first time to read out the singlet/triplet ratio at specific points in time. First, the electron transfer from the donor to the acceptor molecule is initiated with a pump laser pulse. This gives rise to the charge-separated state with singlet spin. The uncoupled electron spins can now evolve. After a certain time, a second laser pulse follows. “This push laser pulse in turn transfers an electron from the acceptor back to the donor, whereby the second laser pulse forces the system to immediately make the decision between triplet or singlet product formation, for which the radical pair would normally take several spin oscillation periods,” says Ulrich Steiner, who, together with his Russian colleague, has confirmed the interpretation of the experiments by model calculations based on quantum theory. In this manner it is possible to take what may be called snapshots of the spin state of the radical pair at different times.