Seeing below the surface of bimetallic nanoparticles

New technique for tracking the synthesis of core–shell bimetallic nanoparticles 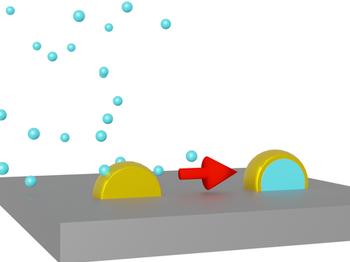 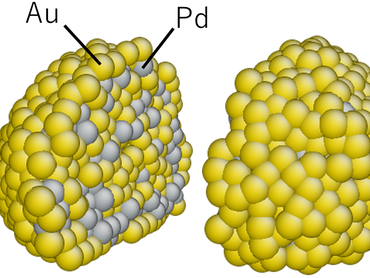 Nanoparticles are important in many disciplines because their high surface area compared with their volume gives them interesting properties. Continued development of analytical methods for nanoparticles is therefore crucial. Researchers from Osaka University have reported a way of characterizing the formation of a particular kind of metal nanoparticles in real time. Their findings are published in Physical Review B.

Core–shell nanoparticles comprise one type of material encapsulated within another and offer properties that are not available using just one material.

When the materials are metals, and one is deposited on top of the other, certain features of the metals—for example the atom size and the surface energy—mean they should organize with a particular metal as the shell. However, in practice, the result is not always what is expected and can change depending on the experimental procedure.

Methods for analyzing core–shell nanomaterials are generally applied after synthesis, providing little insight into what is happening during the formation process. The researchers therefore developed a technique that allowed them to follow the metal deposition and restructuring in real time at room temperature.

“Our technique is based on the idea that if the higher surface energy metal forms the shell, the surface area of the particle wants to minimize so it tightens the sphere,” explains first author Nobutomo Nakamura. “However, if there is interdiffusion of the metals, the structure of the core–shell particles is more dispersed. We therefore tracked the difference in particle shape using a piezoelectric resonator.”

The shape changes were followed by growing nanoparticles very close together on a substrate and then monitoring the interparticle distance through the resistance.

The system was used to investigate three different combinations of two metals, deposited in both orders. It was found that the depositions could be followed in real time and deposition of gold followed by palladium notably led to interdiffusion, forming core–shell particles with a structure opposite to the deposition order.

“Our technique offers the opportunity to fine-tune the preparation of bimetallic core–shell nanoparticles,” says Associate Professor Nakamura. “This control is expected to lead to the custom design of nanomaterials for applications such as hydrogen sensing and sustainable processing.”