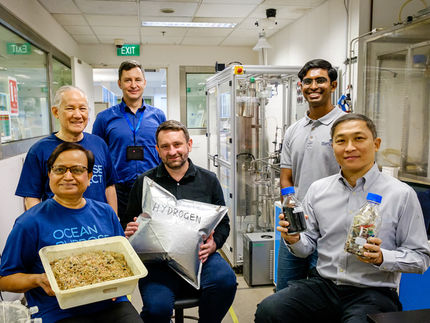 Scientists from Nanyang Technological University, Singapore (NTU Singapore) have developed a new method for plastic waste to be converted into hydrogen based on pyrolysis, a high temperature chemical process.

Unlike PET plastic bottles which can be recycled easily, plastic litter containing contaminated food packaging, styrofoam and plastic bags, is challenging to recycle. They are currently incinerated or buried in landfills, leading to both water and ground pollution.

Using pyrolysis, plastic litter can then be converted into two main products, hydrogen and a form of solid carbon, called carbon nanotubes. Hydrogen is useful for generating electricity and powering fuel cells like those found in electric vehicles, with clean water as its only by-product.

To further refine the new conversion method and to assess its commercial feasibility, the research team is test-bedding it on the NTU Smart Campus to treat local plastic waste, in partnership with Bluefield Renewable Energy, a local environmental firm that specialises in mobile waste to resources technologies

The multimillion-dollar research joint project, supported by the Industry Alignment Fund-Industry Collaboration Projects (IAF-ICP) administered by Singapore’s Agency for Science, Technology and Research (A*STAR), aims to develop feasible solutions to economically scale up the conversion of waste plastics to hydrogen over the next three years.

The project will also explore the potential of other emerging technologies for decentralised waste management. The conversion of challenging waste streams into energy and valuable resources, such as syngas, biochar, activated carbon and carbon nanotubes will be investigated.

With 832 million kilogrammes of unrecycled plastic waste generated in Singapore annually, the converted energy could potentially power up to 1,000 five-room apartments for a year.

With 269 million kilogrammes of plastic waste currently floating in the oceans, the NTU team estimates that if converted into energy the waste could power an electric vehicle for 20 to 40 million kilometres – 500 to 1000 times the Earth’s circumference.

“As part of NTU’s sustainability drive, in developing new ways to turn trash to treasure, we are looking to convert waste plastics that cannot be recycled into high-value chemicals and resources, such as hydrogen fuel, synthetic fuel that could replace petrol, and carbon nanotubes used for many industrial applications,” explained co-inventor Assoc Prof Lisak, Director of the Residues, Resource and Reclamation Centre (R3C) at NEWRI, who is also a faculty at the School of Civil and Environmental Engineering.

Last November, NEWRI researchers participated in Race For Oceans Singapore, a kayak race organised by the Ocean Purpose Project, to collect plastic waste along the shores of Singapore. The purpose was two-fold – to clean up marine litter through sports as community mobilisation and to use these litter as research materials for developing an efficient plastic waste-to-hydrogen process.

Ms Mathilda D’silva, CEO and Founder, Ocean Purpose Project, said: “Our collaboration with NTU NEWRI comes at a critical time when we need to rethink how plastics are recycled in Asia. As evident in our recent collaboration for the Ending Plastic Pollution Innovation Challenge (EPICC) United Nations Development Programme, where NTU NEWRI showcased how plastics in Lombok, Indonesia could be converted into hydrogen, it is clear that there is an untapped and highly available resource of ocean plastic that can be converted into the fuel of the future: hydrogen, which will prove a gamechanger in removing ocean pollution at scale.

“The cutting-edge research, innovation and dynamism of the NTU NEWRI team is a dream collaboration for NGOs like us in ocean conservation, who have to move beyond awareness campaigns and beach clean ups towards completely disrupting our ideas of how plastic waste should be handled. We are proud as plastic-to-resources influencers to promote our Singapore-based research that will forge a new future for plastic recovery, potentially cleaning thousands of coastlines in Asia.”

Mr Craig Gavin, CTO, Bluefield Renewable Energy (BRE), said: “During this pandemic, there has been an increase in plastic usage as most of us have been taking away our food in plastic containers and doing more grocery shopping. Current practices and efforts to recycle them have been challenging and require disposals in landfills and/or incineration plants leading to environmental contamination issues. In BRE, we pride ourselves in our ability to convert wastes into resources based on our flexi-pyrolysis system.

“Collaborating with NTU NEWRI has allowed us to utilise these environmentally unfriendly plastic waste stream as a feedstock and converting them into valuable resources. With the market pivoting to a Hydrogen powered economy, this collaboration allows us to expand our technological applications and commercialised locally created innovations, ultimately building a Singapore centred resource hub.”

The research team says the solid carbon from their new conversion process is much easier to store as compared to gaseous CO2 emissions from plastic waste incineration. Furthermore, the solid carbon can be easily sold as a manufacturing feedstock for speciality chemicals or biofuels.

For instance, it is a greener source of carbon for making carbon nanotubes, which is useful for many applications such as for batteries and composite manufacturing, says NEWRI Senior Research Fellow Dr Andrei Veksha, the co-inventor of the process who is piloting the technology.

Plastic waste-to-hydrogen is a two-stage process: plastic waste is first decomposed upon heating into gases that contain low concentrations of hydrogen molecules. During the second stage, when the gases enter a reactor filled with a catalyst, the technology enables the release of hydrogen fuel and the formation of carbon nanotubes.

If the initiative is successful, it will help Singapore reduce the amount of total waste disposed and prolong the lifespan of Singapore’s only landfill, Semakau Landfill, which is estimated to run out of space by 2035.