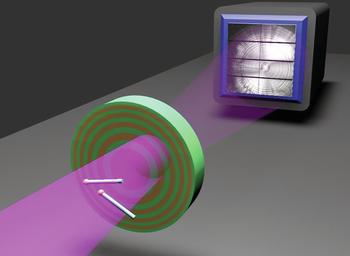 The scientists used a lens consisting of two semiconductor nanowires. This lens, with a diameter of less than one fiftieth of a millimetre, was then adjusted between the object to be imaged and an X-ray camera in the extremely bright and and focussed X-ray beam at the German Electron Synchrotron (DESY). Incorporating precise measurements about the imperfections of the lens into their algorithms enabled them to decode the information and construct a sharp image.

X-rays make it possible to explore inside human bodies or peer inside objects. The technology used to illuminating the detail in microscopically small structures is the same as that used in familiar situations – such as medical imaging at a clinic or luggage control at the airport. X-ray microscopy enables scientists to study the three-dimensional structure of materials, organisms or tissues without cutting and damaging the sample. Unfortunately, the performance of X-ray microscopy is limited by the difficulties in producing the perfect lens. A team from the Institute for X-ray Physics at the University of Göttingen has now shown that, despite the manufacturing limitations of lenses, a much higher image quality and sharpness than ever before can be achieved using a special experimental arrangement and numerical image reconstruction downstream: an algorithm compensates for the deficits of the lenses. The results were published in the journal Physical Review Letters.

The scientists used a lens consisting of finely structured layers of a few atomic layers deposited from concentric rings on a thin wire. The lens, with a diameter of less than one fiftieth of a millimetre, was then adjusted between the object to be imaged and an X-ray camera in the extremely bright and focussed X-ray beam at the German Electron Synchrotron (DESY) in Hamburg. On the camera, the researchers received three different types of signal that together provided complete information about the structure of the unknown object, even if the objects absorbed little or no X-ray radiation. All that remained was to find a suitable algorithm to decode the information and reconstruct it into a sharp image. For this solution to work, it was crucial to precisely measure the lens itself, which was far from perfect, and to completely dispense with the assumption that it could be ideal. In their first application, the researchers investigated semiconductor nanowires, which are of particular interest as new materials for photovoltaics for instance.

"It was only through the combination of lenses and numerical image reconstruction that we could achieve the high image quality," explains first author Dr Jakob Soltau. "This is how we compensate for the fact that it is impossible to produce X-ray lenses with the required fine structure and quality," adds Dr Markus Osterhoff. "Due to these difficulties, many researchers had already turned away from using X-ray microscopy with lenses and instead have tried to replace the lenses completely with algorithms. However, by using both lenses and algorithms together, our approach now combines the best of both worlds," concludes Professor Tim Salditt. A particular advantage of the new method is that the object does not have to be scanned, meaning very fast microscopic processes in materials can also be "filmed" in motion. Such experiments are planned as the next step at DESY and at the European X-ray laser XFEL in Hamburg.