On the road to the super-battery 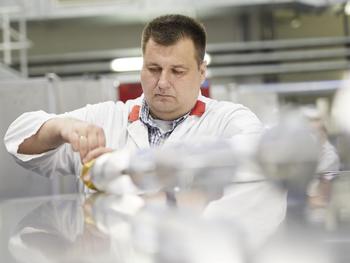 Dr. Anatoliy Senyshyn mounts a sample to analyze with neutrons at the structure powder diffractometer SPODI at the Heinz Maier-Leibnitz Zentrum.

A research team led by the Technical University of Munich (TUM) has taken an in-depth look at the internal workings of batteries during charging and discharging. Their findings may help optimize charging processes.

When an electric car is being charged, the charge indicator moves quickly at first, be then much more slowly at the end. "It's like putting things into a closet: In the beginning it's easy, but finding available space gets more difficult as the closet fills up," says Dr. Anatoliy Senyshyn from the Technical University of Munich's Research Neutron Source Heinz Maier-Leibnitz (FRM II).

The internal structure of a battery both before and after the charging process is already known. Led by the Heinz Maier-Leibnitz Zentrum (MLZ) at TUM, a research team has now observed for the first time a battery's lithium distribution during the entire charging and discharging process with the materials science diffractometer STRESS-SPEC. They then verified the measurements using the high-resolution powder diffractometer SPODI.

Distribution of lithium ions is crucial

Lithium ions move from the cathode to the anode during charging, and in the reverse direction when discharging. In their investigations, the researchers ascertained that the distribution of the lithium constantly changes during charging and discharging. "When the lithium is unevenly distributed, the exchange of lithium between the anode and the cathode doesn't work at hundred percent in the parts of the battery where too much or too little lithium is present. However, an even distribution of lithium increases performance," says Senyshyn.

The researchers succeeded in capturing the uneven distribution of lithium in a battery with high-resolution images: In order to obtain the situation in the entire battery, they investigated one small partial volume after another and put these individual images together to form an overall picture.

With the help of the Helmholtz Association's DESY ("Deutsches Elektronen-Synchrotron") and the European Synchrotron Radiation Facility ESRF, it was possible to select partial volumes with dimensions on the order of micrometers. As a result, the researchers discovered that the lithium is distributed unevenly not only along the electrode layers, but also perpendicular to the layers.

The effects observed may help in long-term development of rechargeable batteries, for example for electric cars, says Senyshyn: "The distribution of the lithium can influence many battery properties. Once we have these better under control, we'll be able to significantly improve the performance of batteries in the future."