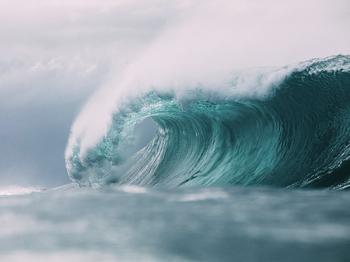 Hydrogen has drawn attention in recent years as a potential source of clean energy because it burns without producing climate-damaging emissions. However, traditional hydrogen production methods have a substantial carbon footprint, and cleaner methods are expensive and technically complex.

Now researchers are reporting a significant advance, a two-electrode catalyst that relies on one compound to efficiently produce hydrogen and oxygen from both seawater and freshwater. Previous attempts at such bi-functional catalysts to split water into hydrogen and oxygen have generally resulted in poor performance in one of the two functions. Using two separate catalysts works but increases the catalysts’ manufacturing cost.

In work described in Energy & Environmental Science, researchers from the University of Houston, the Chinese University of Hong Kong and Central China Normal University report using a nickel/molybdenum/nitrogen compound, tweaked with a small amount of iron and grown on nickel foam to efficiently produce hydrogen and then, through a process of electrochemical reconstruction sparked by cycling voltage, converted to a compound that produced a similarly powerful oxygen evolution reaction.

Most materials are best suited for either HER or OER, but both reactions are required to complete the chemical reaction and produce hydrogen from water. Zhifeng Ren, director of the Texas Center for Superconductivity at UH and a corresponding author for the paper, said the new catalyst not only allows for efficient operations with a single catalyst but also works equally well in seawater and freshwater. “Compared with existing catalysts, this is on par with the best ever reported,” he said.

The catalyst’s strong performance in seawater could solve a problem: most available catalysts work best in freshwater. Splitting seawater is more complicated, in part because of corrosion associated with the salt and other minerals. Ren, who is also M.D. Anderson Chair Professor of Physics at UH, said the new catalyst also generates pure oxygen, avoiding the potential byproduct of corrosive chlorine gas produced by some catalysts.

But supplies of freshwater are increasingly limited by drought and population growth. Seawater, in contrast, is abundant. “Normally, even if a catalyst works for salty water, it requires a higher energy consumption,” Ren said. “In this case, requiring almost the same energy consumption as freshwater is very good news.”

Shuo Chen, associate professor of physics at UH and co-corresponding author on the paper, said the catalyst’s reported strong current density at a relatively low voltage lowers the energy cost of producing hydrogen. But that’s just one way the catalyst addresses affordability, said Chen, who is also a principal investigator with TcSUH.

By using one material – the iron-tweaked nickel/molybdenum/nitrogen compound – for the HER and then using cycling voltage to trigger an electrochemical reconstruction to produce a slightly different material, an iron-oxide/molybdenum/nickel oxide, for the OER, researchers eliminate the need for a second catalyst while also simplifying engineering requirements, Chen said.

“If you are making a device with two different materials on two electrodes, you have to figure out how the electric charge can flow through each electrode and design the structure to fit that,” she said. “In this case, the material is not exactly the same, because one (electrode) undergoes electrochemical reconstruction, but it is a very similar material, so the engineering is easier.”