Calls on sector to change, lead way to enable a sustainable global economy 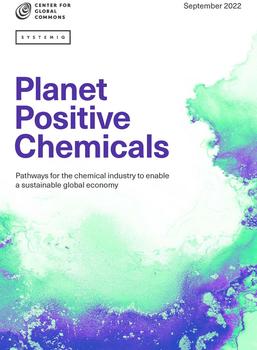 Center for Global Commons, The University of Tokyo

A new report sends a dire warning to the chemical industry, which it says is on track for a future global warming scenario with catastrophic consequences, and sets out tangible, credible pathways for the sector to become an enabler of a sustainable global economy by 2050, while overseeing dramatic growth.

The report, Planet Positive Chemicals, put together by the Center for Global Commons at the University of Tokyo and independent consultancy Systemiq and published September 2022, explores how the chemical industry, which accounts for around 4% of global greenhouse gas emissions, can transition to a sustainable, low-emissions model and operate within planetary boundaries — the limits on essential Earth processes tied to human activity (such as climate change, chemical pollution and stratospheric ozone depletion) for humanity to safely function on the planet.

The report, recognizing the presence of chemicals in all spheres of our modern economy, from packaging and consumer goods to construction and fertilizers, also points out the significant role the industry will play in helping other sectors achieve net zero carbon dioxide emissions.

The publication provides a detailed view of the future pathways for the industry, employing a systemswide examination of the likely demand for chemicals in a net zero world and exploring the sector’s CO2 emissions along its entire value chain. The report integrates careful consideration of how fast and at what scale specific net zero-enabling technologies could be available to help the industry make the transition it needs to operate within the planetary boundaries, many of which it is said to be breaching.

The paper highlights the industry’s multiple harmful impacts on the planet, including high carbon emissions and pollution, and how it lags behind other sectors in climate action. The report identifies the need for radical interventions on both supply and demand sides, such as decoupling from the industry’s long-standing dependence on fossil fuel for production and switching to renewable feedstocks (raw materials used in the industrial production process) and energy sources, and applying carbon capture and storage technologies to reduce CO2 emissions.

It also says chemical production would need to double by 2050 to enable a sustainable global economy, with rapid growth in two key chemicals for their net zero-enabling applications — ammonia (representing 60% of demand), for use as a sustainable shipping fuel, and methanol (representing 20%), to create plastic without fossil fuel.

Industry growth could also create 29 million new jobs, according to a long-term scenario set out in the report.

Moreover, circular approaches, with the industry reusing and recycling chemicals or switching to lower-emissions alternatives, can reduce total demand for chemicals, it says.

The report also paints the scenario in which the chemicals system takes on a new role, passing net zero carbon emissions by the early 2040s, and sequestering enough CO2 to make it emissions negative and serve as a “carbon sink” by 2050.

The capital expenditures to build such a circular, net zero chemical system, which would entail retrofitting legacy infrastructure and switching from fossil fuel to renewable feedstock sources, such as green hydrogen manufactured using renewable energy exclusively, will require funds over $3 trillion by 2050, according to the report.

The authors say the Planet-Positive Chemicals report aims to help the industry and policymakers unite around a common view of the path ahead and accelerate the transition to a sustainable model of operation, especially in the “decade that matters,” between now and 2030. The paper suggests 10 key actions that could transform the system, including establishing a global charter of transition principles and a first-movers coalition to seed markets for net zero chemicals.

Naoko Ishii, UTokyo executive vice president and Center for Global Commons director, said: “To avoid the collapse of the complex and interdependent Earth systems on which humanity, including our economic prosperity depends, we need to transform our social and economic systems and our lifestyles. The chemical industry has an outsized role to play, with its products used across many sectors and is ubiquitous in modern life. The opportunity is clear: to bring the system back within the planetary boundaries, including net zero GHG (greenhouse gases) and become a contributor to the global commons (the stable and resilient Earth system that sustains our lives). We hope this report will open the debate about how the chemical industry can transform itself to grasp that opportunity.”

Guido Schmidt-Traub, managing partner of Systemiq, said: “The chemical industry underpins every modern economy, but it must change profoundly across its entire value chain to meet the objectives of the Paris Agreement (on climate change). Importantly, these changes are eminently feasible using proven technologies outlined in this report. The recommendations for policymakers, the industry and the investment community are practical and actionable.”

The report is the result of over a year of research and detailed quantitative analysis conducted by the core project team at UTokyo and Systemiq, and was overseen by an independent panel, comprising experts across industry and academia and independent consultants, to ensure the study’s impartiality. Mitsubishi Chemical Corp. funded the report and research.

The authors have made their modeling and analysis publicly available, and will host a virtual discussion on Oct. 10, 2022, to explore what is needed from the industry, its customers, policymakers and the investment community to make the transition happen.