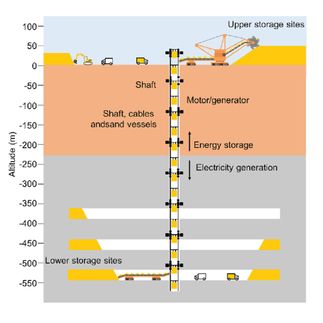 Renewable energy sources are central to the energy transition toward a more sustainable future. However, as sources like sunshine and wind are inherently variable and inconsistent, finding ways to store energy in an accessible and efficient way is crucial. While there are many effective solutions for daily energy storage, the most common being batteries, a cost-effective long-term solution is still lacking.

UGES generates electricity when the price is high by lowering sand into an underground mine and converting the potential energy of the sand into electricity via regenerative braking and then lifting the sand from the mine to an upper reservoir using electric motors to store energy when electricity is cheap. The main components of UGES are the shaft, motor/generator, upper and lower storage sites, and mining equipment. The deeper and broader the mineshaft, the more power can be extracted from the plant, and the larger the mine, the higher the plant's energy storage capacity.

“When a mine closes, it lays off thousands of workers. This devastates communities that rely only on the mine for their economic output. UGES would create a few vacancies as the mine would provide energy storage services after it stops operations,” says Julian Hunt, a researcher in the IIASA Energy, Climate, and Environment Program and the lead author of the study. “Mines already have the basic infrastructure and are connected to the power grid, which significantly reduces the cost and facilitates the implementation of UGES plants.”

The investment costs of UGES are about 1 to 10 USD/kWh and power capacity costs of 2.000 USD/kW. The technology is estimated to have a global potential of 7 to 70 TWh, with most of this potential concentrated in China, India, Russia, and the USA.

“To decarbonize the economy, we need to rethink the energy system based on innovative solutions using existing resources. Turning abandoned mines into energy storage is one example of many solutions that exist around us, and we only need to change the way we deploy them,” concludes Behnam Zakeri, study coauthor and a researcher in the IIASA Energy, Climate, and Environment Program.