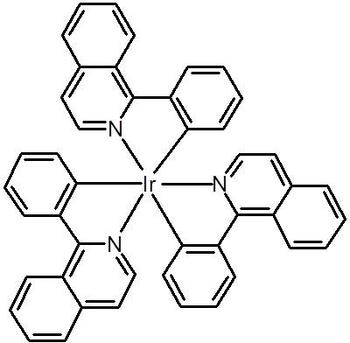 Institute of Physics, University of Würzburg

Chemical structure of the iridium-based molecule used by the scientists to produce single photons. 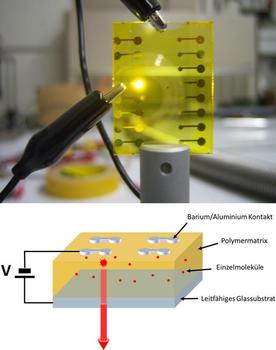 The innovative component with which single photons can be produced at room temperature (red arrow) is schematically represented in the diagram below and shown in action in the picture on top. Electric current passes through the circular contacts, stimulating the underlying color molecules to light up. The optically active area of the component is about two millimeters in diameter.

Tiny components with the ability to emit single particles of light are important for various technological innovations. Physicists of the Universities of Würzburg, Stuttgart and Ulm have made significant progress in the fabrication of such structures.

Why are researchers interested in light sources that are able to emit single particles of light? "Such light sources are a basic requirement for the development of new encryption technologies," explains Professor Jens Pflaum at the Institute of Physics of the University of Würzburg.

Suitably equipped components would be able to ensure that data can no longer be "fished for" during transmission without such process being noticed. These components might be used, for instance, to increase the security of online payment systems – since any data manipulation would be immediately detected and the relevant counter measures could be directly implemented. This cannot be achieved with conventional light sources, such as lasers, because these always emit large quantities of identical light particles or photons as they are referred to by physicists.

Advantages of the innovative light source

An innovative component that emits single photons has now been introduced by Professor Pflaum and his cooperation partners from Stuttgart and Ulm in the prestigious journal "Nature Communications".

The innovative light source has more than just one advantage: It consists of standard materials for organic light-emitting diodes, is pretty easy to manufacture and can be electrically controlled. What's most important: It works at room temperature. So far, any comparable optical components manufactured from semiconductor materials, such as gallium arsenide, are only functional at temperatures far below the freezing point.

Single color molecules in a matrix

What's the design of the new component? "It's quite similar to the pixel of a display, familiar to everybody with a mobile phone," explains Professor Pflaum: An electrically conductive layer is applied to a substrate – in our case represented by a glass plate. Next, an organic plastic matrix, in which the individual color molecules are embedded, is added onto this layer. The matrix is then fitted with electrical contacts. If these are connected to a battery, a flow of electrical current to the color molecules is induced, stimulating them to continually fire single photons. This has been demonstrated by the physicists with photon correlation measurements.

Three tricks were crucial for the achievement. Number one: "We selected the right color molecules," says Maximilian Nothaft of the University of Stuttgart. The molecules have chemical structures in which three organic complexes are grouped around one central iridium atom.

Trick number two: The physicists provided for a proper distribution of the color molecules within the matrix. Too densely packed molecules would have interacted, no longer emitting single independent photons.

Trick number three: "The interface between the electrical contacts and the matrix has been well designed by us," explains Professor Jörg Wrachtrup of the University of Stuttgart. This is important for enabling the required electrons, the carriers of the electric charge, to be injected into the polymer matrix in the first place. In this case, the scientists were successful with a contact comprised of an aluminum / barium double layer.

Glimpse into the future

What are the physicists going to do next? "We shall try to deposit the matrix with the color molecules and the electrical contacts onto various materials so that we can use flexible substrates, such as plastic films," says Professor Pflaum. This can be done with a device that works like an ink jet printer, which is a standard technology that has been used in laboratories for years. The advantage of this is: The light sources can be even better positioned on a surface.