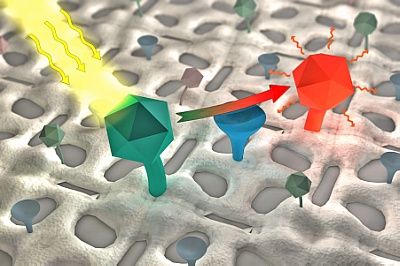 Biosensor: The color sensor principle developed at the HZDR is based on a red and a green fluorescent dye. If a substance to be detected is present in a water sample, then the sensor shines green; a red color, however, indicates that the substance is not present.

While residual medications don’t belong in the water, trace metals from industrial process waters handled by the recycling industry are, in contrast, valuable resources. Scientists at the Helmholtz-Zentrum Dresden-Rossendorf (HZDR) have developed a simple color sensor principle which facilitates the easy detection of both materials as well as many other substances. This is the concept: If the analyzed sample shines red, then the water is ‘clean;’ if its color turns green, however, then it contains the substances the scientists wish to detect.

“Pharmaceutical residues are becoming increasingly a problem for the environment. Sewage plants do not decompose these substances completely. The problem will worsen if one considers, for example, the rising proportion of elderly people in our society who actually account for the increased consumption of medicine,” notes Dr. Katrin Pollmann, Team Leader Biotechnology at the HZDR. “Our color sensor method is generally suitable for detecting all kinds of substances,“ continues Dr. Pollmann. It could also be very profitable when used for recycling strategic metals, an important research topic at the HZDR’s Helmholtz Institute Freiberg for Resource Technology (HIF) where Dr. Pollmann’s group conducts their research. The recycling industry handles process waters which contain metals that can be utilized.

The sensor principle is based on a red and a green fluorescent dye. If a substance to be detected is present in a water sample, then the sensor shines green; a red color, however, indicates that the substance is not present. What is the reason for the color difference? “The color molecules are located on a nanostructured surface consisting of bacterial proteins. The dyes are so close to one another that energy is transferred from the green to the red dye if these dyes are irradiated with light at a specific wavelength, for example, the light emitted by a laser. Then the sample shines red. This energy transfer, though, only occurs if the water sample is ‘clean.’ If, however, any foreign substances such as, for example, the pharmaceuticals or pollutants to be detected accumulate between the color molecules at specific binding sites, then the transfer is interrupted and only the green dyes shine,” explains Ulrike Weinert. Her doctoral dissertation revolves around the binding of color molecules on nano surfaces.

The network project (“AptaSens”) was subsidized by the Federal Ministry of Education and Research (BMBF). Nanostructured surfaces are an important part of the project. They are extracted from the envelope proteins of bacteria which are cultivated by the researchers in a lab. “The proteins form regular lattice structures at the nano level. They are ideally suited to evenly arrange functional groups and other molecules,” notes Weinert.

Another essential component of the sensor principle are the binding sites on the nano surface of the substances which are to be detected. That’s why so-called aptamers are used. These aptamers are short, single-stranded DNA oligonucleotides; the DNA segments can be designed in such a way that they are capable of specifically binding the most diverse substances such as the pharmaceuticals or the pollutants mentioned above. Dr. Beate Strehlitz from the Leipzig-based Helmholtz Centre for Environmental Research (UFZ) has specialized in this field. Within the scope of the AptaSens project, her team developed such a receptor for the antibiotic kanamycin which is used, for example, for the treatment of such bacterial infections of the eye as conjunctivitis, or in veterinary medicine.

What remains to be done now is to combine the kanamycin receptor with the dyes to test the color sensor principle with a sample substance. “From there, it’s just a small step to the development of a complete color sensor,” notes Katrin Pollmann. For this, the researchers need to integrate the individual components – which include bacterial proteins, dyes, and aptamers – into a sensor chip. They have actually conducted a number of experiments with suitable substrates such as, for example, glass or silicon dioxide. “The sensor chip could be as small as a thumbnail. It could be wetted on site with the water sample to be analyzed. This would also include a laser light source which activates the chip as well as a detector that measures the change in color,” adds Pollmann. The scientists are now applying for a follow-up project.