Metamaterials that act as an analog computer 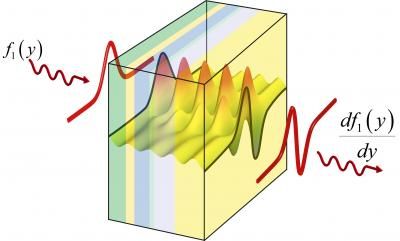 A study by researchers at the University of Pennsylvania, The University of Texas at Austin and University of Sannio in Italy, shows that metamaterials can be designed to do "photonic calculus" as a light wave goes through them. A light wave, when described in terms of space and time, has a profile that can be thought of as a curve on a Cartesian plane. The researchers' theoretical material can perform a specific mathematical operation on that wave's profile as the light wave passes through the material. Working like an analog computer, the theoretical metamaterial illustrated here produces the derivative of the incoming wave's profile.

The field of metamaterials has produced structures with unprecedented abilities, including flat lenses, invisibility cloaks and even optical "metatronic" devices that can manipulate light in the way electronic circuitry manipulates the flow of electrons.

Now, the birthplace of the digital computer, ENIAC, is using this technology in the rebirth of analog computing. A study by researchers at the University of Pennsylvania, The University of Texas at Austin and University of Sannio in Italy, shows that metamaterials can be designed to do "photonic calculus" as a light wave goes through them.

A light wave, when described in terms of space and time, has a profile in space that can be thought of as a curve on a Cartesian plane. The researchers' theoretical material can perform a specific mathematical operation on that wave's profile, such as finding its first or second derivative, as the light wave passes through the material.

Essentially, shining a light wave on one side of such a material would result in that wave profile's derivative exiting the other side. Metamaterials capable of other calculus operations, such as integration and convolution, could also be produced.

Viewing and manipulating this type of light wave "profile" is an everyday occurrence for applications like image processing, though it is typically done after the light wave has been converted to electronic signals in the form of digital information. The researchers' proposed computational metamaterials could almost instantly perform such operations on the original wave, such as the light coming in through the lens of a camera, without conversion to electronic signals.

The study was published in the journal Science.

The researchers' theory has its roots in analog computing. The predecessors of modern computers were mechanical calculators, which used physical elements, ranging from sliding rulers to complex arrays of gears and drive shafts, to represent, store and manipulate numerical information. In the most complicated examples, a user might set the starting values to be computed on a wheel or dial, and then crank a handle a certain number of times. Intervening sets of gears transformed the starting values in a step-wise fashion until the results were produced. In the mid-20th century, electronic analog computers replaced the mechanical ones, with series of resistors, capacitors, inductors and amplifiers taking the place of gears and drive shafts. Starting values were represented by electric voltage and current, and the results could be read out from the changes in voltage and current after passing through these dedicated circuits.

Both mechanical and electronic analog computers were particularly suited to calculating large tables of information. Where the paper-and-pencil method would require tedious and repetitious steps performed on each of the table's elements, with each step prone to human error, analog computers could perform those steps in parallel, producing the results all at once.

The advent of the first all-purpose, digital computer — Penn's ENIAC — was revolutionary; abstracting the input data allowed digital computers to be multi-purposed. They could be reprogramed to perform multiple types of calculations, unlike their purpose-built analog predecessors. Though analog computers still had an advantage in not having to translate, quantize and digitize the information they were calculating, their mechanical and electronic makeup could not compete with the advances in integrated electronic circuits that allowed digital computers to rapidly shrink their footprints and boost their speed.

By swapping their mechanical gears and electrical circuits for optical materials that operate on light waves, however, it may once again be analog computers' time to shine, but this time at the micro- and nanoscale.

"Compared to digital computers, these analog computers were bulky, power hungry, and slow," Engheta said. "But by applying the concepts behind them to optical metamaterials, one day we might be able to make them at micro- and nanoscale sizes, and operate them at nearly speed of light using little power."

"The thickness of our structures can be comparable with the optical wave length or even smaller," said Vincenzo Galdi of the University of Sannio. "Implementing similar operations with conventional optical systems, such as lenses and filters, would require much thicker structures."

Metamaterials are composites of natural materials, but are designed in such a way that they manipulate electromagnetic waves in ways that are more than the simple sum of their parts. Objects made from natural materials have atoms and molecules that are arranged in certain patterns dictated by the laws of physics and chemistry. Those patterns give natural materials their electromagnetic properties, which in turn determine how they influence the properties of waves. By going to another layer of organization — making patterns of multiple materials at length scales smaller than the waves passing through them, like a series of nanoscopic gold cubes embedded in glass— metamaterial designers can alter waves in ways not possible by simple surfaces or lenses.

For example, a pen sticking out of a glass of water looks bent because the water surface refracts or "bends" the light; light traveling from the pen to the viewer from below the water line has a different angle of refraction than the light traveling from above. Unlike natural materials, however, metamaterials can be designed to produce negative angles of refraction. If the water in the glass exhibits negative refraction, the image of the pen below the water line would not just be bent, but flipped as if viewed in a mirror.

Multiple such manipulations can be combined or performed in sequence, allowing metamaterial researchers to change the shape of waves in complex ways.

To begin, the researchers created a computer simulation of an ideal metamaterial, one that could perfectly change the shape of the incoming wave profile into that of its derivative. With the ideal metamaterial as a guide, the researchers then constrained their simulations to specific materials suitable for existing fabrication techniques, such as silicon and aluminum-doped zinc oxide.

"The simulation results of the two were almost identical, so we're hopeful we'll be able to do photonic calculus in a physical experiment in the future," Engheta said.

Once built, these metamaterials could be put to use doing specific computational tasks that are best suited to an analog approach. Taking derivative of an algebraic function, for example, is a task that digital computers must perform by brute force, essentially scanning the curve and evaluating the difference between every pair of neighboring points. Even though modern digital computers can scan the 2-D profile very quickly, the time to complete the task increases along with the size of the profile. A computational metamaterial designed to calculate derivatives with light waves, by contrast, could complete the task nearly instantaneously regardless of the size of the profile, as it would operate on all points at once.

One analog-suited application that might make direct use of such computational metamaterials is edge detection, an increasingly common image processing technique that helps software find faces and identify objects in pictures.

"When we do edge detection on an image now with currently available image processing techniques, we do it digitally, pixel by pixel," Engheta said. "We scan an image and compare all of the neighboring pixels, and where there is a big difference between two, we label it an edge. With this computational metamaterial in the future, hopefully we will be able to do it all at once. The light from the image itself could go in and the edge-detected profile could come out the other side."

"Thanks to recent advances in nanotechnology," said Andrea Alù, Associate Professor and David & Doris Lybarger Endowed Faculty Fellow at The University of Texas at Austin, "today we are able to control light propagation through a material in unprecedented ways, and realize material functionalities that would have been unthinkable only a few years ago. In this paper, we set the stage to have metamaterials realize a broad set of mathematical operations for us on-the-fly, as light propagates through them."

Future research will entail constructing and testing these computational metamaterials in laboratory settings. If successful, the researchers will draw up plans for metamaterials that can perform other mathematical operations, or even solve equations. By encoding the input wave with a mathematical function, then feeding the outgoing wave back to the input, the intervening metamaterial would ultimately produce a wave that would reveal the desired variables within that function.