Mini-Spectrometers - From the smallest component to the dedicated measurement system
15-Oct-2015 - Agency for Science, Technology and Research (A*STAR) 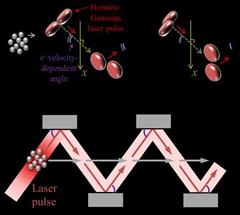 An all-optical, 3-D method of electron pulse compression for applications like ultrafast electron imaging is shown schematically in (a), with a cost-effective implementation depicted in (b).

Many mysteries of nature are locked up in the world of the very small and the very fast. Chemical reactions and material phase transitions, for example, happen on the scale of atoms and attoseconds. A research team from Massachusetts Institute of Technology (MIT), Massachusetts, in collaboration with the Singapore Institute of Manufacturing Technology (SIMTech), Singapore, have proposed a new technique that may help record better images of such ultrafast phenomena. The team will present their work at the Frontiers in Optics, The Optical Society's annual meeting and conference in San Jose, California, USA.

Ultrafast electron pulses are one tool scientists use to probe the atomic world. When the pulses hit the atoms in a material, the electrons scatter like a wave. To avoid the problems associated with static field compression the MIT and SIMTech team proposed the first all-optical scheme for compressing electron pulses in three dimensions and demonstrated the viability of the scheme via first-principle numerical simulations. In the scheme, laser pulses, functioning as three-dimensional lenses in both time and space, can compress electron pulses to attosecond durations and sub-micrometer dimensions, providing a new way to generate ultrashort electron pulses for ultrafast imaging of attosecond phenomena.

"Using this scheme, one can compress electron pulses by as much as two to three orders of magnitude in any dimension or dimensions with experimentally achievable laser pulses. This translates, for instance, to reducing the duration of an electron pulse from hundreds of femtoseconds to sub-femtosecond scales," said Liang Jie Wong, the lead researcher on the team, who is now at the Singapore Institute of Manufacturing Technology and was formerly a postdoctoral fellow at the Massachusetts Institute of Technology.

Short pulse durations are critical for high temporal resolution in ultrafast electron imaging techniques. These techniques can create movies that allow scientists to observe, in real-time, how molecules interact in a chemical reaction, or how the structure of a material or microorganism is affected by the introduction of external stimuli.

To ensure that the electron pulse arrives at the sample or detector with the desired properties in spite of inter-electron repulsion, ultrafast electron imaging setups usually require means to compress the electron pulse both transversely and longitudinally.

"Just as conventional lenses can be used to focus a light beam, our configuration can be used to focus an electron beam. In our case, however, we can perform the focusing not only in the dimensions perpendicular to the direction of travel, but also in the dimension parallel to the direction of travel. Hence, the entire setup can be seen as a spatiotemporal lens for electrons," Wong said.

Besides being of great interest in ultrafast electron imaging for compressing both single- and multi-electron pulses, the proposed scheme is potentially useful for focusing other particles such as accelerated protons and neutral atoms. Broader applications include the creation of flat electron beams and the creation of ultrashort electron bunches for coherent terahertz emission in free-electron based terahertz generation schemes, which in turn has a wide range of applications from biomedical imaging to airport security.