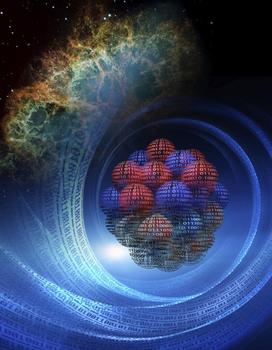 Conceptual art connects the atomic underpinnings of the neutron-rich calcium-48 nucleus with the Crab Nebula, which has a neutron star at its heart. Zeros and ones depict the computational power needed to explore objects that differ in size by 18 orders of magnitude

An international team led by Gaute Hagen of the Department of Energy's Oak Ridge National Laboratory used America's most powerful supercomputer, Titan, to compute the neutron distribution and related observables of calcium-48, an isotope with an atomic nucleus consisting of 20 protons and 28 neutrons. Computing the nucleus from first principles revealed that the difference between the radii of neutron and proton distributions (called the "neutron skin") is considerably smaller than previously thought. The collaboration also made predictions for physical quantities that are current targets of precision measurements. These calculations also impact the size of a neutron star, thereby connecting objects that differ in size by 18 orders of magnitude.

"We built a nucleus from scratch from its basic constituents - protons and neutrons," said Hagen, a theoretical physicist who initiated and led the project with an award from DOE's Office of Science Early Career Research Program. "To solve this strongly correlated system of 48 nucleons is far from trivial, because it is a complicated quantum mechanical many-body problem. Many things had to come together - accurate nuclear forces, sophisticated computational algorithms and a powerful tool such as Titan at ORNL - to achieve these results."

While the distribution of electric charge inside the atomic nucleus is well known from experiments involving electron scattering, the distribution of the neutrons, which have no electric charge, is difficult to measure. In the nucleus of calcium-48, which has eight more neutrons than protons, the neutron distribution extends beyond the charge distribution and thereby sets the actual size of this nucleus. "This is the first really reliable calculation of such a massive nucleus from first principles," said Hagen. "We reproduced basic observables for the first time by building this nucleus from scratch. We've answered a basic question--what is the size of the atomic nucleus?"

The ORNL-led team calculated radii, binding energies and dipole polarizabilities for helium-4, oxygen-16 and calcium-40 and accurately reproduced measurements of these isotopes. "That was a quality check of our calculation," Hagen said. "It gives us confidence about our predictions for calcium-48."