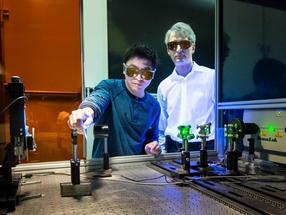 Adrian Sabau and Jian Chen work with a laser to prepare the surface of carbon fiber composites and aluminum to create superior bonds that can absorb 200 percent more energy than conventional bonds.

Joining carbon fiber composites and aluminum for lightweight cars and other multi-material high-end products could become less expensive and the joints more robust because of a new method that harnesses a laser's power and precision.

The process, developed by a team led by Adrian Sabau of the Department of Energy's Oak Ridge National Laboratory, would replace the practice of preparing the surface of the materials by hand using abrasive pads, grit blasting and environmentally harmful solvents. Using a laser to remove layers of material from surfaces prior to bonding improves the performance of the joints and provides a path toward automation for high-volume use.

"Our technique is vastly superior to the conventional surface preparation methods," Sabau said. "Combined with the potentially dramatic reduction in the cost of carbon fiber polymer composites, this represents an important step toward increasing the use of this lightweight high-strength material in automobiles, which could reduce the weight of cars and trucks by 750 pounds."

"These surface contaminants affect surface energies and the quality of adhesion, so it is critical that they are removed," said Sabau, adding that the laser also penetrates into the top resin layer, leaving individual carbon fibers exposed for direct bonding to the adhesive and increasing the surface area for better adhesion.

Sabau noted that the process also doubles the energy absorption in the joints, which has implications for crash safety and potential use in armor for people and vehicles. Tim Skszek of Magna International (Troy, Michigan), a project partner, shares Sabau's enthusiasm.

"The results are most encouraging, enabling the automated processing of a multi-material carbon fiber-aluminum joint," Skszek said. "With this work, we were able to focus on addressing the gaps in technology and commercial use, and we look forward to applying these findings to products."