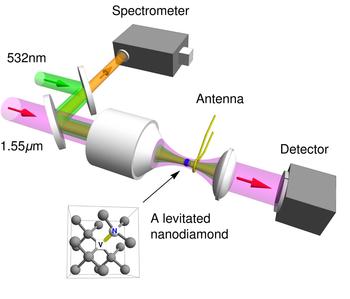 This is a schematic of an optical tweezer used in a vacuum chamber by Purdue University researchers, who controlled the "electron spin" of a levitated nanodiamond. The advance could find applications in quantum information processing, sensors and studies into the fundamental physics of quantum mechanics.

Researchers have demonstrated how to control the "electron spin" of a nanodiamond while it is levitated with lasers in a vacuum, an advance that could find applications in quantum information processing, sensors and studies into the fundamental physics of quantum mechanics.

Electrons can be thought of as having two distinct spin states, "up" or "down." The researchers were able to detect and control the electron spin resonance, or its change from one state to the other.

"We've shown how to continuously flip the electron spin in a nanodiamond levitated in a vacuum and in the presence of different gases," said Tongcang Li, an assistant professor of physics and astronomy and electrical and computer engineering at Purdue University.

Findings are detailed in a research paper. The electron spin resonance was shown to differ in the presence of helium and oxygen gases, meaning the technique could be used in a new type of sensor to detect and measure gases. Oxygen gas sensors are extensively used to monitor the oxygen concentration in automotive exhaust and in medical instruments such as anesthesia monitors and respirators. Nanodiamond-based sensors represent a potential improvement over conventional sensors.

"While more detailed studies are required to fully understand this phenomenon, our observation suggests a potential application for oxygen gas sensing," Li said.

The levitating nanodiamonds also could find uses in quantum information processing, experimental techniques to probe fundamental physics in quantum mechanics, and the measurement of magnetic and gravitational fields, which could be applied to computer memory and experiments to search for deviations from Newton's law of gravitation.

Levitating the nanodiamonds in a vacuum enables precise control and rigorous measurement of the floating particles. The nanodiamonds are about 100 nanometers in diameter, or roughly the size of a virus, and contain "nitrogen vacancy centers" critical to potential practical applications. A nitrogen-vacancy center is an atomic-scale defect formed in the diamond lattice by substituting a nitrogen atom for a carbon atom and creating a neighboring void in the crystal lattice. Researchers can exploit this feature to control the electron spin.

One type of laser was used to "trap" and levitate the nanoparticle in a vacuum chamber, and another was used to monitor the electron spin. A millimeter-scale antenna delivers microwaves to control and flip the electron spin, and a spectrometer detects these changes in spin. A vacuum is needed to reduce interference from air molecules.

Quantum computers would take advantage of phenomena described by quantum theory called "superposition" and "entanglement." Computers based on quantum physics might dramatically increase the capacity to process, store and transmit information. One long-term goal of the Purdue research is to use the technique to test the famous Schrödinger's cat thought experiment, in which a cat may be both dead and alive at the same time.

"We want to put a single nanodiamond at two different locations at the same time," Li said.