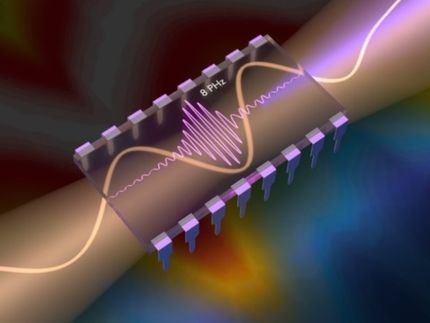 In the field of electronics, the principle 'the smaller, the better' applies. Some building blocks of computers or mobile phones, however, have become nearly as small today as only a few atoms. It is therefore hardly possible to reduce them any further.

Another factor for the performance of electronic devices is the speed at which electric currents oscillate. Scientists at the Max Planck Institute of Quantum Optics have now created electric currents inside solids which exceed the frequency of visible light by more than ten times They made electrons in silicon dioxide oscillate with ultrafast laser pulses. The conductivity of the material which is typically used as an insulator was increased by more than 19 orders of magnitude.

The possibility of having light replace conventional sources of electricity, such as batteries in order to generate electric currents inside solid materials, has captured the imagination of scientists for more than a century. The attempts to observe currents in solid materials by shining light on them have remained without any success for the past few decades. "Today, however, control of matter with lasers is rapidly advancing and the capability to measure light fields with ever finer precision has turned to reality", explains Eleftherios Goulielmakis, Head of the Research Group Attoelectronics at the Max Planck Institute of Quantum Optics.

Conventional electronic techniques can neither generate nor capture such fast electric currents because in conventional circuits, electrons are pushed by the electric field of standard electric sources, such as batteries to perform oscillations. Even though all electrons initially follow the force of the battery fields, they eventually collide with other slower moving particles such as atoms or ions and lose their synchrony with each other. Intense light fields can push electrons extremely fast. They can perform their oscillations and create currents before any other particle in the solid has the opportunity to move.

The scientists therefore used lasers to generate currents. These can set electrons in solids into an extremely fast oscillatory motion. "To measure this fast electronic motion, we used optical techniques. The coherently oscillated electrons inside the silicon dioxide generate ultraviolet radiation. It is easier to measure this radiation than to directly detect the currents," says Manish Garg, one of the study's authors. The detected electric currents are approximately one million times faster than those widely used in a modern computer processor. The researchers are also interested in exploring the physical limits: "As electrons move coherently they also generate light which is the key element of photonics. For this reason we may soon be able to unify two important areas of modern science and technology: electronics and photonics," Goulielmakis says. At the same time, the approach could pave the way for electronic devices which are one million times faster than those available today.