A new thermoelectric material for a sustainable society

The first synthesis of bulk CaMgSi with thermoelectric properties 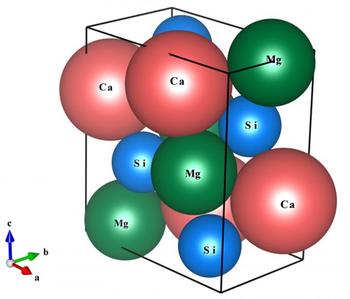 Schematic illustration of the atomic structure of the synthesized CaMgSi determined by X-ray diffraction. 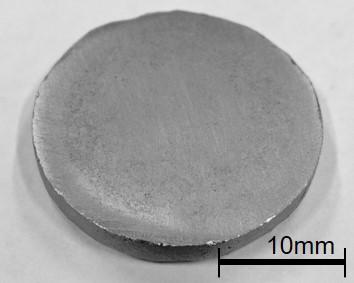 Picture of the synthesized bulk CaMgSi thermoelectric material through the procedure developed in this study.

Thermoelectric materials, which can directly convert thermal energy into electrical energy (Seebeck effect), can be effectively used for the development of a clean and environmentally compatible power-generation technology. However, these materials are not commonly used for practical applications as they mostly include toxic and/or expensive elements.

Recently, researchers at the Materials Function Control Laboratory at the Toyohashi University of Technology and the Nagoya Institute of Technology have successfully synthesized a new thermoelectric material, CaMgSi, which is an intermetallic compound. The key to this development was the synthesis procedure; bulk CaMgSi intermetallic compound was synthesized by combining mechanical ball-milling (MM) and pulse current sintering (PCS) processes.

"Appearance of thermoelectric property in the intermetallic compound, CaMgSi, has been predicted by both theoretical and experimental studies", explain the researchers of this work, Nobufumi Miyazaki and Nozomu Adachi. " However, the biggest issue in front of us was the synthesis of thermoelectric CaMgSi of optimal size ", they continued. In general, alloys are produced by mixing the constituent elements in their molten forms. However, when a temperature is raised up to the melting temperature of Si, Mg vapors; liquids of Ca, Mg, and Si cannot exists at same time.

Associate Professor Yoshikazu Todaka says "To overcome the aforementioned problem, we chose the mechanical ball milling process to mix the elements homogeneously, without melting, and then a chemical reaction between Ca, Mg, and Si was induced using the pulse current sintering process".

Consequently, the intermetallic compound, CaMgSi, with sufficient size was synthesized. The thermoelectric property of the synthesized CaMgSi exhibited a performance comparable to that of the previously developed Mg-based thermoelectric materials. It is expected that an addition of a fourth element to CaMgSi renders it with superior thermoelectric properties. Interestingly, they found that the novel thermoelectric can exhibit both n- and p-type conductivity with a slight change in the composition of CaMgSi. Such a property for the material is very significant for its application in power-generation modules.

The new thermoelectric material synthesized in this study is composed of lightweight elements, and has a low density of 2.2 g/cm3. Therefore, one of the possible applications of the material is in automobiles to utilize waste heat emitted from engines. These findings could contribute to the development of green energy technology.