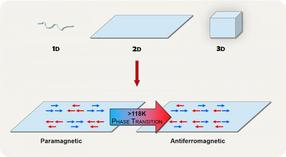 This is a simplified representation of the 2-D magnetic phase transition.

PARK Je-Geun, Associate Director at the Center for Correlated Electron Systems, within the Institute for Basic Science (IBS), working in collaboration with CHEONG Hyeonsik at Sogang University and PARK Cheol-Hwan at Seoul National University demonstrated the magnetic behavior of a special class of 2D materials. This is the first experimental proof to a theory proposed more than 70 years ago.

Recently, scientists all over the world are investigating the properties and applications of extremely thin 2D materials, just one-atom-thick, like graphene. Studying the properties of 2D materials in comparison with their 3D counterparts raises many thought-provoking questions; one of them concerns magnetic phase transitions.

Some materials are magnetic because of the behavior of the spins of their electrons. In simple terms, spins (spin quantum numbers, or more precisely their associated magnetic moments), are just like tiny magnets, conventionally shown as arrows. At extremely low temperatures, these spins tend to align, lowering the electrons' total energy. However, above a specific temperature that varies from material to material, spins lose their alignment and become randomly oriented. Similar to how ice loses its internal order and becomes liquid above a certain temperature; 3D magnets also lose their magnetization above a critical temperature. This is called phase transition and is an ever-present process in 3D objects.

However, what happens to 1D and 2D systems at low temperatures? Do they experience a phase transition? In other words, are we going to see a transition from solid to liquid in a chain of water molecules (1D) or in a one-atom thick sheet of water (2D)?

About one century ago, the physicist Wilhelm Lenz asked his student Ernst Ising to solve this problem for 1D systems. Ising explained it in 1925 and concluded that 1D materials do not have phase transitions. Then, Ising tried to grapple with the same question for a particular type of 2D materials. The problem turned out to be much harder. The solution came in 1943 courtesy of Lars Onsager, who received the Nobel Prize for Chemistry in 1968. Indeed, Onsager found that the materials, which follow the Ising spin model, have a phase transition. However, despite the huge importance this theory has in the following development of the whole physics of phase transitions, it has never been tested experimentally using a real magnetic material. "The physics of 2D systems is unique and exciting. The Onsager solution is taught on every advanced statistical mechanics course. That's where I learned this problem. However, when I discovered much later that it has not been tested experimentally with a magnetic material, I thought it was a shame for experimentalists like me, so it was natural for me to look for a real material to test it," explains PARK Je-Geun.

In order to prove the Onsager model, the research team produced crystals of iron trithiohypophosphate (FePS3) with a technique called chemical vapour transport. The crystals are made of layers bound by weak interactions, known as Van der Waals interactions. Layers can be peeled off from the crystal by using scotch tape, in the same way tape can strip paint from a wall. The scientists peeled the layers until they were left with just one layer of FePS3 (2D). "We can call these materials magnetic Van der Waals materials or magnetic graphene: they are magnetic and they have easy-to-cleave Van der Waals bonds between layers. They are very rare, and their physics is still unexplored," says the professor.

While there are several methods to measure the magnetic properties of bulk 3D materials, these techniques have no practical use to measure magnetic signals coming from monolayer materials. Therefore, the team used Raman spectroscopy, a technique normally used to measure vibrations inside the material. They used vibrations as an indirect measure of magnetism, the more vibrations, the less magnetization.

Park's team and colleagues first used Raman spectroscopy on bulk 3D FePS3 material at different temperatures and then tested FePS3 2D monolayer. "The test with the bulk sample showed us that the Raman signals can be used as a kind of the fingerprint of phase transition at temperatures around 118 Kelvin, or minus 155 degrees Celsius. With this confirmation we then measured the monolayer sample and found the same patterns," points out Park. "We conclude that 3D and 2D FePS3 have the same signature of the phase transition visible in the Raman spectrum." Both in the bulk sample and the monolayer, FePS3' spins are ordered (antiferromagnetic) at very low temperatures, and become disordered (paramagnetic) above 118 degrees Kelvin. "Showing magnetic phase transition with this tour-de-force experiment is a beautiful test for the Onsager solution," concludes the physicist.

In the future, the team would like to study other 2D transition metal materials, going beyond the 2D Ising spin model.