Water as the underlying driver of the Earth’s carbon cycle 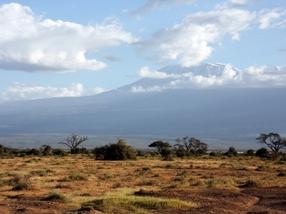 Extreme dry periods alternating with rainy seasons characterize the savanna ecosystem, like this one in East Africa.

Currently terrestrial ecosystems absorb about one quarter of the anthropogenic carbon dioxide emitted into the atmosphere. However, how this land carbon sink will develop in the future is uncertain and strongly depends on the responses of ecosystems to climate. New clues on how the land carbon sink is regulated have now been revealed by researchers led by the Max Planck Institute for Biogeochemistry in Jena, Germany: When looking at the global scale, the annual carbon balance largely responds to temperature, while locally water availability turns out to be the dominant factor. Their study also highlights that compensation effects of water availability lead to the differences seen between local and global scales.

Current climate change is characterized by rising atmospheric carbon dioxide (CO₂) concentrations and concomitant atmospheric warming. However, the annual growth rate of CO₂ which has been measured in the atmosphere for several decades varies largely from year to year. These variations originate primarily from fluctuations in carbon uptake by land ecosystems, rather than by oceans or from alterations in anthropogenic emissions. How is this carbon sink controlled, and how will it develop in the future? Discussions on whether temperature or water availability is driving the strength of the land carbon sink, and thus its variations, have been highly controversial. According to current knowledge, the year-to-year changes of the carbon balance seem to be related to tropical temperature when looking at the global scale. However, other studies find that the largest carbon balance variability is seen in wide-spread water-limited regions.

This apparent discrepancy has now been explained by an international expert team led by the Max Planck Institute for Biogeochemistry in Jena, Germany. In a systematic modelling approach, Jung and his colleagues applied empirical and process-based models, to analyze from small areas up to the global surface the effect of temperature and water availability variations on carbon exchange between the atmosphere and the terrestrial biosphere.

At local scales, water availability is the dominant cause of the year-to-year variability of both CO₂ uptake in plants by photosynthesis, measured as gross primary productivity (GPP), and CO₂ release from plants and microbes, measured as terrestrial ecosystem respiration (TER). In sum, the net ecosystem exchange of CO₂ between the atmosphere and the terrestrial biosphere, termed NEE, is also determined by water availability. However, at the global scale, variability in the temporal net exchange is mostly driven by temperature fluctuations. How can these apparently contradictory results be explained?

“What looks quite paradox at a first view, can be illustrated by looking close at the different spatial and temporal variations of the biosphere-atmosphere interactions”, explains Dr. Martin Jung, lead author of the Nature publication. “There are two compensatory effects of water availability: first, at the local scale, temporal water-driven GPP and TER variations compensate each other.” E.g., very dry weather conditions lead to diminished water availability and concomitantly reduced photosynthetic CO₂ fixation, but also to reduced amounts of respired CO₂. In sum, the effects partially compensate each other. “In addition, on a global scale, anomalies of water availability also compensate in space” adds Jung. “If it is very dry in one part of the world, it is often very wet in another region, thus globally water-controlled anomalies in net carbon exchange outweigh in space.”

Besides shedding light on previously contradictory findings, the outcome also points to the need for a research focus on how climate variables change while scanning across different scales and under global warming conditions.

“The simple relationship between the temperature and the global land carbon sink should be treated with caution, and not be used to infer ecological processes and long-term predictions” adds Dr. Reichstein, head of the Department. With continuous global warming, the scientists expect the changing water cycle to become the critical factor for the variability in the global land carbon sink.