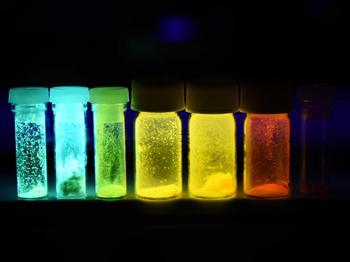 Photoluminescent compounds were synthesized by the Coordination Chemistry and Catalysis Unit glowing under a UV light. 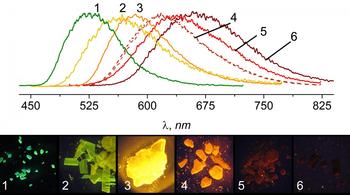 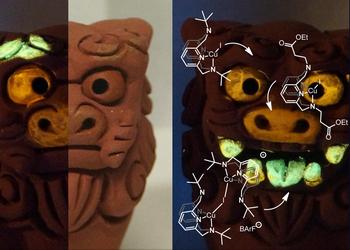 Okinawa shisas painted with photoluminescent compounds produced by the Coordination Chemistry and Catalysis Unit at OIST. The chemical structures of the compounds, in white/light grey, show the different sized substituents on the central rings. The green colored molecules display the largest substituents, with smaller ones on the yellow and orange molecules.

Chemical compounds that emit light are used in a variety of different materials, from glow-in-the-dark children's toys to LED lights to light-emitting sensors. As the demand for these compounds increases, finding new efficient methods for their production is essential. New research from the Coordination Chemistry and Catalysis Unit at the Okinawa Institute of Science and Technology Graduate University (OIST) describes a new strategy for producing photoluminescent (PL) compounds with increased capabilities.

Production of PL compounds is typically centered around two main methods: the conventional metal-ligand system or an aggregation based system. The first method requires a complex ligand, or compound, that strongly binds to a metal ion in a way that would allow for the complex to emit light of certain wavelength. Unfortunately, this system is rigid and unable to be modified once the complex is produced. In contrast, the aggregation-based system is driven by weak interactions between different molecules or their parts. This allows for tunability by shifting the color of light emitted based on interactions of the PL compound with the local environment. However, aggregation is typically difficult to control and thus not feasible to use in systems requiring precision.

Recent research from OIST scientists combines the best parts of both methods to produce PL molecules. "We wanted to create better photoluminescent compounds by combining the two previous concepts: the flexibility of the weak aggregation driven complexes and the controllability of the conventional metal-ligand system", explained Dr. Georgy Filonenko, postdoctoral researcher from the Coordination Chemistry and Catalysis Unit at OIST.

Researchers, led by Prof. Julia Khusnutdinova, designed compounds whose photoluminescence depended on weak interactions between atoms within the single compound molecule itself. As a result, they obtained the tunability of the aggregation-based system confined to a single molecule, without the need for intermolecular aggregation.

Akin to the conventional metal-ligand system, the molecules synthesized by Filonenko consist of a ligand and a copper ion which interact to produce photoluminescence. However, the ligand in the OIST-synthesized molecules is not rigid and has two cyclic-bonded atom structure, referred to as rings, stacked on top of one another that can interact just like in the aggregation system, but within a single molecule. Interestingly, researchers discovered that they could adjust the color emitted from these molecules based on the distance between these rings. "We found that we could change the color produced by the compound based on what other groups of atoms were bound to the ligand," illuminates Filonenko. "Larger groups would cause the rings to move closer together, shifting the color to the orange-yellow range, while smaller substituents would make the rings move apart, turning the emission color red. The ability to tune the wavelength of light emitted from these molecules provides a huge advantage over the traditional metal-ligand PL complexes".

The tunability and controllability of these complexes makes them an attractive candidate for many applications. "We see a high potential for these compounds to be used as sensors due to their very high sensitivity to the surrounding environment," revealed Filonenko.