Towards a new design paradigm for high-performance catalysts 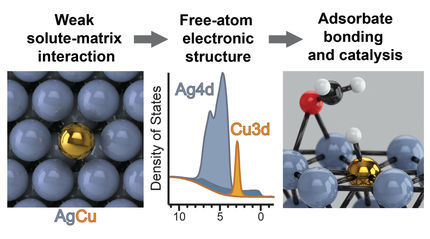 An illustration of an isolated-atom alloy

Mark Greiner and Travis Jones from the Max-Planck Institute for Chemical Energy Conversion and the Fritz-Haber Institute, along with a team of international researchers, have recently made a discovery that could transform the way chemicals are synthesized.

The chemical industry relies on high-performance catalysts to produce the chemicals used by society – such as fuels, plastics and medicines. Some chemicals cannot be efficiently produced because the needed catalysts have not yet been discovered. A great deal of contemporary research is aimed at designing novel catalysts to fulfill these roles.

Recently reported in the journal Nature Chemistry, Greiner, Jones and Co. discovered a phenomenon that occurs in metal alloys that could yield a new design paradigm for high-performance catalysts. The team of researchers found that when adding a very small amount of one metal to another, the minority element’s properties can change drastically, altering how it interacts with molecules. This finding is of particular interest to chemical industry, where the efficiency of chemical production often depends on how molecules interact with metal catalysts.

The team found that a dilute mixture of copper in silver results in certain properties that resemble free isolated atoms. Nature uses isolated metal atoms in biological catalysts called enzymes. These finely tuned catalysts are known for their unparalleled catalytic efficiency. However, industrial catalysts have yet to capitalize on this phenomenon because they require much harsher conditions than biological systems can tolerate. Industrial catalysis must instead rely on less efficient inorganic materials in the form of macroscopic particles. By taking advantage of the properties of isolated atoms, there is the potential that catalytic efficiencies of industrial catalysts could rival biological systems.

Jones and Greiner made use of the recently developed concept of “single-atom alloys–alloys” in which the minority element forms no bonds to other minority element atoms. Using such materials, they showed experimentally that certain single-atom alloys exhibit properties that resemble isolated ions. With theoretical calculations, they showed that a number of metal combinations should also give rise to this behavior, representing a class of hitherto unexplored class of materials whose catalytic properties can be tuned. These findings could open up a new paradigm for designing novel high-performance catalysts.