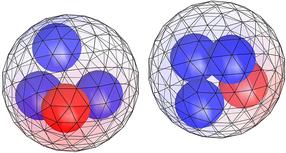 Despite their name, rare earth elements actually aren't that rare. Abundant in mines around the world, rare earths are used in many high-tech products, including visual displays, batteries, super conductors, and computer hard drives. But while they aren't necessarily tricky to find, the elements often occur together and are extremely difficult to separate and extract.

"Having the ability to recover rare earths is important because they are finite but in high demand," said Northwestern University's Monica Olvera de la Cruz. "To extract them, we need them to disperse and separate, but they tend to aggregate and clump together."

Olvera de la Cruz and her team are working to better understand why rare earths are strongly attracted to each other across long distances, making separation and extraction tediously difficult. A series of molecular simulations suggest, for the first time, that the medium in which the elements are suspended -- in addition to the elements themselves -- is partially responsible for the strong attraction. This finding could potentially make rare earth recovery faster, easier, and less expensive.

Rare earths are a set of 17 chemical elements along the bottom of the periodic table. Because most of the elements each have +3 charges in their ionic structures, they are notoriously difficult to separate.

"They become very concentrated," said Olvera de la Cruz, the Lawyer Taylor Professor of Materials Science and Engineering in Northwestern's McCormick School of Engineering. "If we could understand why they attract one another, we could optimize the extraction mechanism."

The time-consuming and expensive separation process requires hundreds of steps and toxic chemical solvents. To separate the elements, engineers encapsulate them in self-assembled nanodroplets of water immersed in oil. Engineers then use surfactants, which grab the elements from the water and pull them into the oil. But when the water droplets are suspended in oil, the droplets are strongly attracted to one another and aggregate.

"Earlier experiments and full-atom calculations revealed that these droplets interact strongly at all large distances," Shen said. "Unfortunately, those studies did not reveal the origin of those interactions."

In a theoretical study, Olvera de la Cruz's team discovered that the mixed medium of oil and water plays a major role.

Although researchers have previously studied charged nanoparticles in water, they typically used fixed, step-by-step approaches that did not apply to such a dynamic system. Olvera de la Cruz bypassed this issue by developing a computational approach.

In a surprising twist, the team also discovered that the finding only applies to water droplets in oil. When the reverse occurs -- oil droplets suspended in water -- the induced charge is repulsive and the attraction is reduced. This better understanding of emulsions can be applied to separating rare earths as well as other elements, including the removal of radioactive metals and nuclear waste.