Quantum computers may be able to come out of the cold 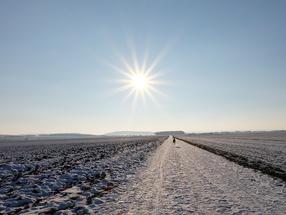 A materials expert says quantum computers may be able to come out of the cold, thanks to his research breakthrough. Dr Jonathan Breeze is from the Department of Materials at Imperial College London. He says his research breakthrough may help scientists overcome a major obstacle with quantum computers – the fact that they have to operate in conditions that are colder than deep space.

Colin Smith caught up with Dr Breeze to learn more about quantum computing and what his work is currently focussed on to enable this technology to process information at room temperature. Quantum computers offer the potential to carry out computing operations in parallel, which could rapidly speed up computations. Quantum computers do exist but their processing power is currently very limited, being able to process only a few qubits. A qubit is a quantum bit, the counterpart to the binary digit or bit in conventional computing.

What are the potential benefits of quantum computers?

If scientists can overcome the current limitations, quantum computers could offer the potential to carry out millions of operations or computer processes in parallel at the same time. This could revolutionise the way information is analysed and transform many different fields of research including drug discovery and cryptography - making computer networks virtually hacker-proof. Quantum computing could also enable researchers to simulate materials at the nanoscale in more detail than it is currently possible using conventional computers.

The major difference between a conventional computer and a quantum computer is the way in which they store and process information. Quantum particles have a physical property called ’spin‘, similar to a magnet with a north and south pole, which can be manipulated to process information.

Exploiting the spin of a quantum particle enables information to be processed in a completely different way to standard computers. For example, conventional computers use either a 0 or 1 as the basis for processing information. In quantum computing, information can be stored as a 0 or 1, or both simultaneously. This phenomenon is known as superposition and essentially enables this powerful, parallel processing ability.

What are their limitations?

At the moment, quantum computers can only operate at cryogenic temperatures - one hundred times colder than deep space at roughly minus 275 degrees Celsius.

As a consequence, these computers can only process a few qubits.Warming things up creates a different problem in that the qubits get disturbed by their environment.

This is where other bits of matter and fields doing their own thing create what we scientists call noise.

This noise gets worse the higher the temperature becomes, hence the need for cryogenic cooling. This means that qubits are only able to retain their quantum information for a short while before the effect of the noisy environment disturbs the quantum states to such an extent that the information is lost.

How does quantum computer processing work?

A signature of a physical system’s ability to function as a quantum computer is the observation of quantum Rabi oscillations since they enable the “reading” and “writing” of quantum information to be carried out.Rabi oscillations occur when a quantum particle jumps between two quantum states when it couples strongly to a field, in our case an electromagnetic field. Instead of sitting quietly in a single state, the particle oscillates back and forth between two states if the energy difference is equal to the energy in the field.

The research could also pave the way for quantum-enhanced technologies such as new devices for metrology, which could enable more accurate scientific measurements. Other potential breakthroughs could be in new types of sensing technologies and communication systems.