Save Time and Cost with a Benchtop Gallery Photometric Analyzer
23-Nov-2017 - University of California, Davis 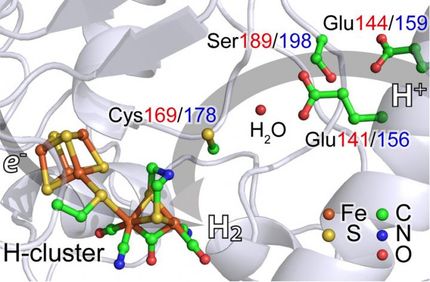 Using a newly developed technique and one of the world's most advanced X-ray sources, researchers from Japan, Germany and the US are studying enzymes that can produce hydrogen gas. Understanding these reactions could be important in developing a clean-fuel economy powered by hydrogen.

Using a newly developed technique, researchers from Japan, Germany and the U.S. have identified a key step in production of hydrogen gas by a bacterial enzyme. Understanding these reactions could be important in developing a clean-fuel economy powered by hydrogen.

In both cases, their hydrogenase enzymes have an active site with two iron atoms.

"Among hydrogenases, [FeFe] hydrogenase has the highest turnover rate (molecular hydrogen production rate) and therefore has a potential role in the future hydrogen economy, either by a direct use or by a synthetic complex which has a similar reaction center," said Professor Stephen P. Cramer in the UC Davis Department of Chemistry and coauthor on the paper along with graduate students Cindy C. Pham (co-first author) and Nakul Mishra and project scientist Hongxin Wang in the same department.

The researchers used a technique called nuclear resonant vibrational spectroscopy (NRVS) to follow the vibrational structures and analysis activity at the iron atoms in the enzyme. NRVS requires special equipment, and is currently only available at four sites in the world: the SPring-8 synchrotron in Hyogo, Japan, where this study was carried out; the Advanced Photon Source at Argonne National Laboratory, Illinois; the European Synchrotron Radiation Facility in Grenoble, France; and Petra-III in Hamburg, Germany.

Using NRVS, the team could show that the iron atoms briefly form a hydride (iron-hydrogen) before releasing molecular hydrogen (H2). It's the first successful experiment of its type on naturally occurring [FeFe] hydrogenases, Wang said.

"The successful outcome of this research is due to the broad collaboration between biochemists, spectroscopists, experimental physicists and theoreticians," Wang said. "This starts a journey to pursue iron specific information for all the intermediates in [FeFe] hydrogenase in the future."