Cornerstone ceremony for new polymerization and compounding plant in Shanghai 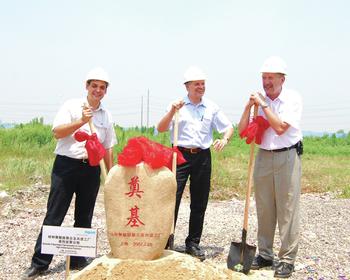 "We are taking a large step forward in our Asia Pacific strategy," stated Dr. Joachim Leluschko, head of the High Performance Polymers (HP) Business Unit of Degussa GmbH, Germany, at a cornerstone ceremony for a specialty polyamides polymerization and compounding plant in Shanghai. As he explained, "This investment in the single-digit million euro range will enable Degussa to substantially expand its presence in the attractive Chinese growth market." The plant is scheduled for completion in late January 2008, and deliveries of its products to Asian customers are to start as early as the end of the first quarter of 2008.

While the global market for specialty polyamides is growing at an annual 5 percent, the Chinese market is experiencing somewhat stronger growth rates. The products stemming from the new plant will allow the company to both serve existing markets and open up new niche applications. In the process, the new production facility, which is being built at Degussa's multi-user site (MUSC) at Shanghai Chemical Industry Park, will enable HP to supply its customers in China and the surrounding region with various specialty polyamides and compounds based on regional raw materials.

MUSC is a site at which at which the activities of differing Degussa business units are located. Degussa took its first production facility into operation at Shanghai Chemical Industry Park in June 2006 in the form of a polyester and colorant production facility. The world's largest speciality chemicals company is now planning to erect an integrated facility for the production of methylmethacrylate specialities as well as the respective methylmethacrylate precursors at MUSC by 2009.