The Versatility of Glycerol 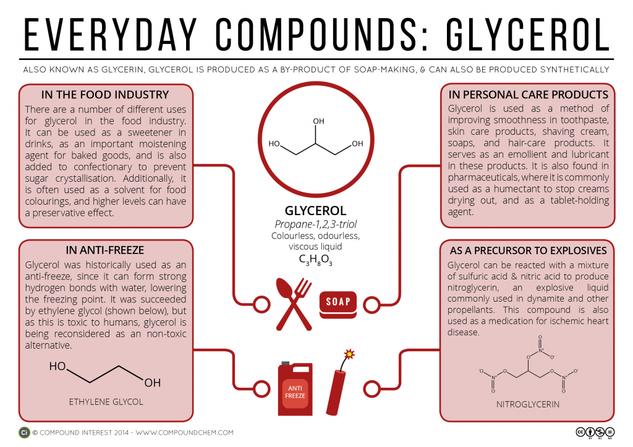 Look on the ingredients label of many different cosmetic or personal care products, and glycerol (often also called glycerin or glycerine) is commonly present. It’s also found in a variety of food products, as well as in some pharmaceutical products, so what’s the reason for its inclusion?

Glycerol is a carbon-based compound, containing three hydroxyl (OH) groups, and at room temperature is a viscous liquid, colourless and odourless, with a sweet taste. It’s produced as one of the by-products of soap-making, which involves the treatment of vegetable or animal fats with strong alkaline solutions; the production of biodiesel is also a process which produces glycerol as a side product. Synthetically, glycerol can be produced from propene, a three carbon alkene. These three methods combined contribute to the estimated 950,000 tons of glycerol that are produced annually in the US & Europe alone.