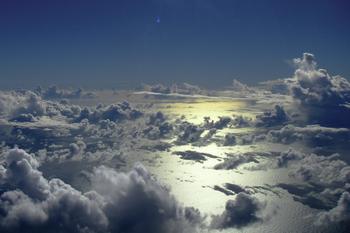 Every cloud is different from the next. It is therefore important to study the types of cloud systems in which aerosols have the greatest influence.

A knowledge gap exists in the area of climate research: for decades, scientists have been asking themselves whether, and to what extent man-made aerosols, that is, dust particles suspended in the atmosphere, enlarge the cloud cover and thus curb climate warming. Research has made little or no progress on this issue. Two scientists from the Max Planck Institute for Meteorology in Hamburg (MPI-M) and the American National Oceanic and Atmospheric Administration (NOAA) report in the journal Nature that the interaction between aerosols, clouds and precipitation is strongly dependent on factors that have not been adequately researched up to now. They urge the adoption of a research concept that will close this gap in the knowledge.

Greenhouse gases that heat up the earth's atmosphere have their adversaries: dust particles suspended in the atmosphere which are known as aerosols. They arise naturally, for example when wind blows up desert dust, and through human activities. A large proportion of the man-made aerosols arise from sulfur dioxides that are generated, in turn, by the combustion of fossil fuels.

The aerosols are viewed as climate coolers, which compensate in part for the heating up of the earth by greenhouse gases. Climate researchers imagine the workings of this cooling mechanism in very simple terms: when aerosols penetrate clouds, they attract water molecules and therefore act as condensation seeds for drops of water. The more aerosol particles suspended in the cloud, the more drops of water are formed. When man-made dust particles join the natural ones, the number of drops increases. As a result, the average size of the drops decreases. Because smaller drops do not fall to the ground, the aerosols prevent the cloud from raining out and extend its lifetime. Consequently, the cloud cover over the earth's surface increases. Because clouds reflect the solar radiation and throw it back into space, less heat collects in the atmosphere than when the sky is clear. Climate researchers refer to this mechanism as the "cloud lifetime effect".

To date, however, it has not been possible to quantify the influence of the cloud lifetime effect on climate. The estimates vary hugely and range from no influence whatsoever to a cooling effect that is sufficient to more than compensate for the heating effect of carbon dioxide.

According to Bjorn Stevens from the MPI-M and Graham Feingold from the Earth System Research Laboratory at NOAA in Washington D.C the enormous uncertainty surrounding this phenomenon is indicative of the fact that the explanation of the cooling mechanism generated by aerosols is oversimplified. The two cloud researchers have analyzed the specialist literature published on this topic since the 1970s. In their survey of the literature they encountered observations that disagree with the cloud lifetime effect: for example, a field study carried out a few years ago found that clouds in the Trade Wind region rain out more quickly rather than more slowly in the presence of virtually opaque aerosols.

On the completion of their analysis of the literature, Stevens and Feingold came to the following conclusion: "Clouds react to aerosols in a very complex way and the reaction is strongly dependent on the type and state of the cloud," says Stevens. Therefore the aerosol problem is a cloud problem. "We climate researchers must focus more on cloud systems and understand them better," he stresses.

As the researchers write, processes in the clouds that counteract or even negate the influence of the aerosol particles have not been taken into account up to now. One example: when a cumulus cloud comes into contact with aerosols, it does not rain out. However, this has certain consequences: the fluid rises and evaporates above the cloud. The air that lies above the cloud cools down and becomes susceptible to the upward extension of the cumulus cloud. Higher cumulus clouds rain out more easily than lower ones. This is what causes precipitation. Therefore, in such situations the aerosol does not prevent the cloud from raining out.

Stevens and Feingold believe that due to such buffer mechanisms the cooling effect of the aerosols is likely to be minimal. They admit, however, that the cloud lifetime effect is not unsuitable per se as a way of explaining the processes triggered by aerosols in the clouds. "All cloud types and states cannot, however, be lumped together," says Stevens. He calls for rethinking aerosol research and makes a comparison with cancer research: "People used to think that cancer was based on a single mechanism. Today, it is known that each type of cancer must be researched individually," says the scientist.

According to Stevens and Feingold, research must first identify the cloud systems on which aerosols have the greatest influence. They suggest starting with particularly common types of cloud, for example flat cumulus clouds over the oceans (Trade Wind cumuli), which cover 40 percent of the global seas.

A research project to be undertaken jointly by the Max Planck Institute for Meteorology and the Caribbean Institute for Meteorology and Hydrology in Miami will make a start on this. The two-year empirical field study will commence on the Caribbean island of Barbados, which is located in the Trade Wind region, in 2010. The researchers will install remote sensing instruments on the island's windward side that will focus on the clouds coming from the open ocean. The land measurements will be complemented by measurements taken in the clouds themselves by HALO, the German research aircraft. The data from this measurement campaign should help the scientists to reach a better understanding of the relationships between cloud cover, precipitation, local meteorological conditions and aerosols.