A magnetic trap for neutrons 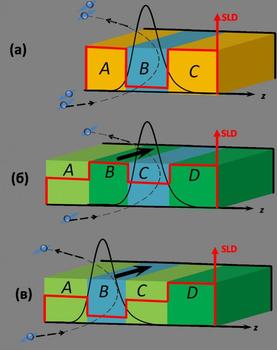 (a) Standard swaveguide structure consisting of reflective layers A and C and transparent layer B between them. (b,c) Magnetic waveguide structure consisting of three layers A, B (magnetic) and C on a substrate D. The red line shows the reflecting ability of the layers. The black line shows depth distribution of neutron density. Spin-up neutrons are trapped into the layer C, and spin-down neutrons into layer B

A team from Skobeltsyn Institute of Nuclear Physics (MSU) together with their colleagues developed a magnetic waveguide able to sort neutrons with different spins and storethem different layers. The results of the study may help in study of electronic devices based on not charge of electrons but on their quantum state.

Waveguides are quite a broad class of objects utilized in many spheres of life, from telecom (optic wave guides) to medicine (a stethoscope is a sound wave guide). The principle of wave guides operation is based on locking a wave between two reflective walls. The same principle of concentration of radiation in a narrow space is used to "lock in" neutrons. To make a neutron waveguide one needs to place (almost) transparent for neutrons layer between two reflective layers. Created thus neutron well allows to trap neutrons in the central layer (Fig. 1a). Neutron waveguides are also called resonators because the density of neutrons in the transparent layer is amplified resonantly (just like the sound in an empty room). Such resonant amplification may be used in many areas, from fundamental nuclear physics studies to exotic spheres of application (like nano-reactors).

A group of researchers has recently proposedto use as reflecting walls magnetic field rather than substance. The point is that neutrons,like electrons, have their magnetic moment called spin. Due to this magnetic moment neutrons can be reflected from magnetic field, just like light quanta are reflected in the optic fiber. Moreover, the reflecting ability depends on a neutron's spin: for spin-up particles it is higher than for the spin-down ones. Based on this effect the team has developed a waveguide based on a magnetic reflection. To do this, three layers with similar scattering ability were deposited on a neutron-impenetrable substrate. The second layer from the top has magnetic moment increasing thusits reflecting ability for spin-up neutrons and reducing it for the spin-down ones. Thus, for different neutrons transparent layers are also different: spin-down particlesare locked in the magnetic layer, and spin-up neutrons - in the non-magnetic one.

"Besides the childish excitement that we've managed to sort and lock neutrons with different spins- we plan to utilize this effect for the research in the field of spintronics, including its new branches as oxide and superconducting," said Dr. Yury Khaydukov, scientific associate of Skobeltsyn Institute of Nuclear Physics (MSU).