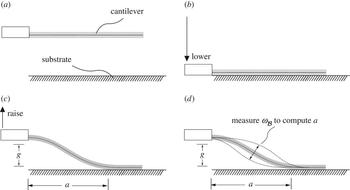 With slight modifications, an atomic force microscope could be used to measure adheasion in micro-materials.

Brown University engineers have devised a new method of measuring the stickiness of micro-scale surfaces. The technique could be useful in designing and building micro-electro-mechanical systems (MEMS), devices with microscopic moving parts.

At the scale of bridges or buildings, the most important force that engineered structures need to deal with is gravity. But at the scale of MEMS -- devices like the tiny accelerometers used in smartphones and Fitbits -- the relative importance of gravity decreases, and adhesive forces become more important.

"The main thing that matters at the microscale is what sticks to what," said Haneesh Kesari, an assistant professor in Brown's School of Engineering and coauthor of the new research. "If you have parts of your device sticking together that shouldn't be, it's not going to work. So in order to design MEMS devices, it helps to have a good way of measuring adhesion in the materials we use."

That's what Kesari and two Brown graduate students, Wenqiang Fang and Joyce Mok, looked to accomplish with this new research. Specifically, they wanted to measure a quantity known as "work of adhesion," which roughly translates into the amount of energy required to separate a unit area of two adhered surfaces.

The key theoretical insight developed in the new study is that thermal vibrations of a microbeam can be used to calculate work of adhesion. That insight suggests a method in which a slightly modified atomic force microscopy (AFM) system can be used to probe adhesive properties.

Standard AFM works a bit like a record player. A cantilever with a sharp needle moves across a target material. A laser shown on the cantilever measures the tiny undulations it makes as it moves along the material's contours. Those undulations can then be used to map out the material's surface properties.

Adapting the method to measure adhesion would require simply removing the metal tip from the cantilever, leaving a flat microbeam. That beam can then be lowered onto a target material, where it will adhere. When the cantilever is raised slightly, some portion of the beam will become unstuck, while the rest remains stuck. The unstuck portion of the beam will vibrate ever so slightly. The authors found a way to use the extent of that vibration, which can be measured by an AFM laser, to calculate the length of the unstuck portion, which can in turn be used to calculate the target material's work of adhesion.

Fang says the technique could be useful in assessing new material coatings or surface textures aimed at alleviating the failure of MEMS devices through sticking.

"Once you have a robust technique for measuring the material's work of adhesion, then you have a systematic way of evaluating these methods to get the level of adhesion needed for a particular application," Fang said. "The main advantage to this method is that you don't need to change a standard AFM setup very much in order to do this."

The approach is also much simpler than other techniques, according to Mok.

"Previous methods based on interferometry are labor intensive and may require many data points to be taken," she said. "Our theoretical framework would give a value for the work of adhesion from a single measurement."

Having demonstrated the technique numerically, Kesari says the next step is to build the system and start collecting some experimental data. He's hopeful that such a system will aid in pushing the MEMS field forward.

"We have MEMS accelerometers and gyroscopes, but I don't think the field has quite lived up to its promise yet," Kesari said. "Part of the reason for that is that people haven't completely understood adhesion at the small scale. We think that a more robust way of measuring adhesion is the first step towards gaining such an understanding."