The team from Kiel University grinds up samples of rocks and other materials to nano-sized particles, such as iron ore shown here. Pressed into pellets, they can be used as reference materials for precise calibration of measuring devices. 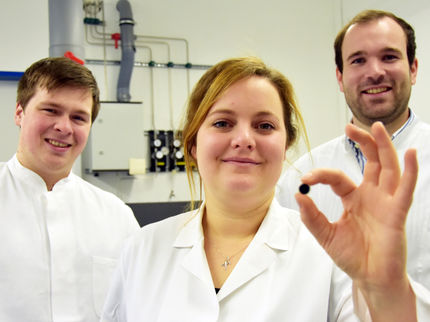 How badly plants are affected by contaminated soil, what the sea floor can reveal about past climate, or what yield an ore mine could deliver in future - an analysis of the chemical composition of minerals and rocks can often provide valuable information. For accurate results, not only are high-quality measuring devices required, but also first-class reference materials, in order to be able to accurately calibrate the instruments. A young team from geosciences and materials science at Kiel University has developed a method for producing particularly homogeneous and pure reference materials for the chemical analysis of solids. The students and alumni now plan to put their idea into practice in their own company, supported by a grant by the German government and the European Union.

"Analytical devices are a bit like scales in the supermarket: they must be calibrated with a specified reference weight so that they display exactly 100 grams," said Simon Nordstad, who completed his Master's degree in Geosciences at Kiel University last year. “Although analytical devices are constantly getting better technically, the development of reference materials is not keeping pace," said the 28-year-old. This is where the idea of the start-up team comes in: they want to use a new method to produce better reference materials for industry and science, so that the analysis of components of solid materials becomes even more precise. This is interesting, for example, in areas such as mining, climate research, archaeology, materials testing, or medicine.

To determine the composition of substances such as minerals, rocks, or other materials samples are analysed with a very fine laser beam. Reference materials are used to calibrate these analytical instruments, where the original raw material is extremly fine-ground and then pressed into tablet form. So far, these so-called pellets were too coarse for delivering accurate analytical results. "The particles in conventional pressed powder pellets are about 40 micrometres in size. But, the measuring beam itself is only a few micrometres wide, so it can actually only capture a single particle," explained Bachelor's degree student Leewe Schönberg, who is studying materials science at Kiel University. “For a representative analysis the composition of the entire sample must be reflected.”

With their special grinding process, the Kiel start-up team can produce tiny grains from all source materials at the nano scale. These can be pressed into ultra-homogeneous tablets - without binding agents - so in a particularly pure form. "It was previously not possible to achieve a similar homogeneity and purity in pellets. Thanks to this quality, they can be made into individual reference materials to calibrate measuring devices such as a mass spectrometer," explained Dr Dieter Garbe-Schönberg from the Institute of Geosciences, who is supervising the project as a scientific mentor.

Thereby, the young Kiel start-up team aims to do no less than setting a new benchmark in solids analysis. Their project is named accordingly: “µ-standards”, written as “my-standards”. With the Greek letter "µ" - used for size information as an abbreviation for "micro" - they want to draw attention to the fine-grained and customised production of their pellets.

With its method in combination with direct solids analysis the team could replace elaborate and costly wet chemistry analytical procedures. These use concentrated acids, and therefore require particularly careful handling and appropriately equipped workstations. "As far as handling hazardous materials is concerned, our pellets are a much safer alternative," said doctoral researcher Samuel Müller, who also provides scientific advice to the team.

The idea for the new process originated when the institute’s acid laboratory could not be used for an extended period during renovations. Laboratory head Garbe-Schönberg started looking for an alternative, accurate analytical method which did not require wet chemistry. The start-up team improved their method over several semesters, followed by the patent registration last year. "There is already great interest from science and industry, especially internationally. This has encouraged us to manufacture our pellets for sale," said 28-year-old Christina Wittke, who completes the team as the marketing management specialist.