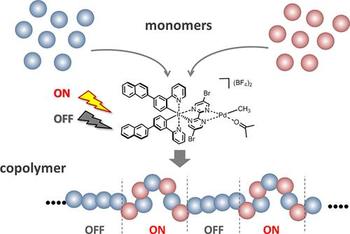 This is a custom sequence of different compositions in a single polymer chain, created by simply exposing an ongoing polymerization reaction to different on/off sequences of visible light.

Researchers from Tokyo Metropolitan University used a light-sensitive iridium-palladium catalyst to make "sequential" polymers, using visible light to change how different building blocks are combined into polymer chains. By simply switching the light on or off, they were able to realize different compositions along the polymer chain, allowing precision control over physical properties and material function. This may drastically simplify existing polymer production methods, and help overcome fundamental limits in creating new polymers.

The world is full of long, chain-like molecules known as polymers. Famous examples of "sequential" copolymers, i.e. polymers made of multiple building blocks (or "monomers") arranged in a specific order, include DNA, RNA and proteins; their specific structure imparts the vast range of molecular functionality that underpins biological activity. However, making sequential polymers from scratch is a tricky business. We can design special monomers that assemble in different ways, but the complex syntheses that are required limit their availability, scope and functionality.

To overcome these limits, a team led by Associate Professor Akiko Inagaki from the Department of Chemistry, Tokyo Metropolitan University, applied a light-sensitive catalyst containing iridium and palladium. By switching a light on and off, they were able to control the speed at which two different monomers, styrene and vinyl ether, become part of a polymer chain. When exposed to light, the styrene monomer was found to be incorporated into the copolymer structure much more rapidly than in the dark, resulting in a single copolymer chain with different compositions along its length. Parts that are rich in styrene are more rigid than those rich in vinyl ether; by using different on/off light sequences, they could create polymers with a range of physical properties e.g. different "glass transition" temperatures, above which the polymer becomes softer.

The newly developed process is significantly simpler than existing methods. The team also found that both types of monomer were built into the polymer via a mechanism known as "non-radical coordination-insertion"; this is a generic mechanism, meaning that this new method might be applied to make polymers using a wide range of catalysts and monomers, with the potential to overcome the limited availability of monomer candidates.