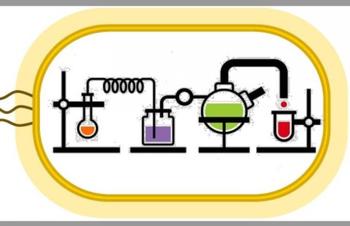 Experts from the University of Nottingham have created a self-sustaining circuit of reactions which is a greener and more efficient method of chemical production. In their paper Self-sustaining closed-loop multienzyme mediated conversion of amines into alcohols in continuous reactions, published in Nature Catalysis, Drs Francesca Paradisi and Martina Contente of the University of Nottingham produce chemicals more efficiently through a looped set of reactions using enzymes in flow.

Experts from the University of Nottingham have created a self-sustaining circuit of reactions which is a greener and more efficient method of chemical production.

Drs Francesca Paradisi and Martina Contente of the University of Nottingham produce chemicals more efficiently through a looped set of reactions using enzymes in flow.

The reactions reduce environmental waste, are self-sustaining and produce higher qualities of the end product.

Enzymes in flow, as used as a series of 'columns' packed with immobilised enzymes and a carrier solution, flows the reagents in and the products out with much faster reaction rates that in normal batch reactions.

Dr Paradisi, Associate Professor in Biocatalysis and Enzyme Engineering in the School of Chemistry, explained that water is often used as the medium in which enzyme mediated chemical reactions can take place but there is an issue in disposing of the waste at the end of the process.

She said: "Your water is now somewhat contaminated with chemical molecules which derive from the complex transformation which has taken place, so pouring it down the drain is not environmentally friendly. Dealing with contaminated water can be very expensive.

"With the loop we have created the water is recycled, the by-products generated are continuously removed and recovered through the process, and the clean water is again used as a carrier for the reagents in the reaction."

The chain of reactions has been created in a loop which is self-perpetuating and means that products are created, purified, and isolated without the need for manual intervention at each step of the process.

"Then imagine if this tap could be mounted onto a water recycling fountain, now you know that the water and the less valuable products (that are still valuable) are never lost, they just act as the carrier of the valuable molecules.

"Not only does this increase efficiency and save time, it creates a zero-waste system. We also discovered that working in this way meant the yields of some "tricky to make" high-value products are also much higher than for traditional chemical reactions - by over 20-fold."

In the research, which was funded through a grant from the Biotechnology and Biological Sciences Research Council, the pair used amines naturally produced in the body such as dopamine, tryptamine and histamines. They then used the loop of reactions to convert these into alcohols such as 4-hydroxytyrosol which is an antioxidant and typically harder to produce.

Dr Paradisi said: "These alcohols are much sought after in the creation of pharmaceuticals, food additives, to create perfumes and aromas and they are difficult and very expensive to produce. Traditional chemical strategies may require up to two weeks to produce a yield of 5-13 per cent for the most challenging molecule. We have found we can produce about 70 per cent in 45 minutes."

And the research is not limited to alcohols as the process can be transferred to create other products.

"The possibilities for this are huge it's just about the right application", added Dr Paradisi. "We can take any molecule of interest and see if we can dissect it step-by-step, thinking which enzyme could catalyse the reaction in reverse, until we get to a simple starting material. We can then assemble the enzymes in sequence, much like creating an artificial bio-system where the first product is the substrate of the next enzymatic step, until the final molecule is achieved. Unlike a biological system, this ex-vivo enzymatic factory is much more robust, we can increase dramatically the amount of enzyme responsible for each step (because it's never lost, it's contained in the reactor), fine-tune the relative rate of each reaction, for very fast conversions.

"We do not have to worry about the integrity of the cell, or the potential toxicity of the molecule(s) for the biological system. The flow effectively means that if each step is optimised, we can treat each part of the cascade as a separate entity. Finally, looping the waste waters back to the beginning, carrying some of the auxiliary components needed by the enzymes to work, we increase exponentially the productivity of the system. This is a new way of working with enzymes that has never been done before."