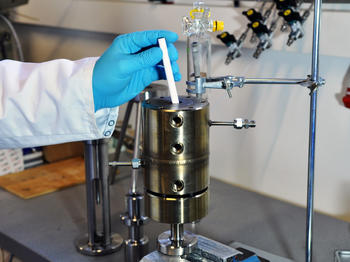 In the future, closed carbon loops play an important role to drastically reduce carbon dioxide emissions and ensure safe and cost-effective access to carbon sources as the basis for products of the chemical industry. In order to increase the efficiency and thus profitability of the synthesis processes required for this, Fraunhofer IKTS has developed a new membrane reactor in cooperation with the Thuringian company MUW-SCREENTEC GmbH.

A closed carbon loop is based on the constant conversion of carbon dioxide by energy – ideally from renewable sources. For example, this power can be used to exploit hydrogen, which, using carbon dioxide, can be converted into storable substances such as methanol. The liquid and thus transportable storage material methanol, produced according to the “power-to-liquid“ principle, has a high energy density and allows unlimited storage without losses. This valuable energy source is also an important basic chemical for further syntheses, e.g. for plastics.

At present, the necessary removal of water from hydrogen and carbon dioxide is still a separate step in the synthesis of methanol. The thermal processes used are energy-intensive and reduce efficiency. With a so-called membrane reactor, it has now been possible for the first time to couple the chemical reaction with the separation of substances in one apparatus. The concept was developed and demonstrated in hardware by the Fraunhofer Institute for Ceramic Technologies and Systems IKTS and MUW-SCREENTEC GmbH with the support of Thüringer Aufbaubank. The membrane-based separation of the water from the reaction space shifts the position of the chemical equilibrium during synthesis in favor of methanol. Based on these results, simulations suggest a significant increase in methanol yield to 60 % in membrane reactors instead of 20 % in conventional reactors when upscaling to industrial plants. The experimental proof of the exact increase of the yield is currently provided by the project partners. The membranes required for the reactors were also developed at Fraunhofer IKTS. In addition to their water-separating properties, they must also be mechanically, chemically and thermally stable under the demanding process conditions. So far, carbon membranes have proven to be particularly effective for methanol synthesis.

The reverse reaction of methanol synthesis – methanol reforming – can also be implemented efficiently in the new membrane reactor. The methanol serves as easy-to-handle liquid hydrogen storage system. The resulting carbon dioxide is separated in the membrane reactor and is thus available again as a starting material for a closed carbon loop. Such closed concepts can be used, for example, to supply ships with hydrogen fuel, which is exploited from easily transportable methanol and water.

With the newly developed membrane reactors, synthetic methane can be produced under modified process conditions and with other catalysts from carbon dioxide and hydrogen, which can be stored unlimitedly in the natural gas network. In addition, alternative fuels such as dimethyl ether or the important basic chemical formaldehyde can be synthesized, thus implementing the “power-to-chemicals strategy“.

In order to achieve further efficiency increase of the synthesis processes, following research work will focus on a targeted improvement of the catalyst properties. Fraunhofer IKTS is therefore developing catalysts that can be applied directly to the membrane rather than in bulk as in the past. “Fraunhofer IKTS has both the entire process chain for the production of stable and selective membranes and extensive expertise in catalyst and process development – a unique competitive advantage worldwide," says Dr. Norman Reger-Wagner, group manager at the Thuringian site.
The continuous improvement of the membranes and the process – for example by selective, membrane-based dosing of hydrogen into the reaction space – is expected to lead to further significant efficiency increases.