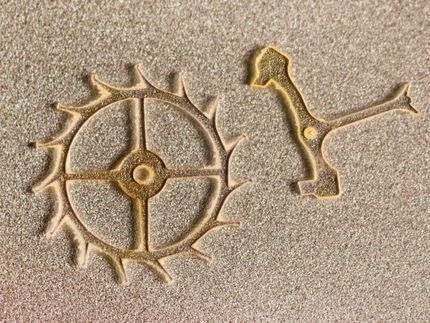 This escapement wheel, made of synthetic diamond, measures 3 millimetres across.

SNSF-funded researchers have developed a new technique for carving materials to create micromechanical systems. In particular, they have created a miniscule watch component out of synthetic single-crystal diamond.

Diamond is very hard and elastic, a very good thermal conductor and highly transparent, which makes it ideal for many mechanical and optical applications. But cutting it into complex shapes with micrometre (one thousandth of a millimetre) precision remains very challenging. A process developed by the team of Niels Quack, an SNSF Professor at EPFL, makes it possible to carve a micromechanical watch system – a three-millimetre-diameter escapement wheel and anchor – out of synthetic single-crystal diamond.

The Lausanne team has refined a technique known as "reactive ion etching" that is widely used in the computer chip industry. The researchers are thus able carve synthetic diamond into three-dimensional shapes 0.15 millimetre thick, i.e. three times greater than the thickest existing structures. "We're getting close to watch industry standard thickness, which is about 0.2 millimetre", explains Quack. "Our technique is interesting to industry, and we are in discussions with a Swiss watch company. We believe that diamond offers reduced friction, which should increase the power reserve. That's how long it takes until the watch has to be rewound. But it's still a hypothesis that needs to be tested." Diamond has other advantages for watchmaking: it's translucid and can be coloured, and is also non-magnetic – a highly valued attribute in the current market.

Previously, reactive ion etching could only create structures 0.05 millimetre thick: when the ions (electrically charged atoms) are accelerated by an electric field, they not only remove the diamond layers at selected spots; they also eat away the mask that defines the desired shape. The depth of the structures that can be obtained is thus limited by the mask's resistance and thickness. In less than six months, Adrien Toros, a scientific assistant at the EPFL's Institute of Microelectronics, developed a double-layered mask that consists of one layer of aluminium, which adheres well to diamond, placed under a second layer of silicon dioxide, which is thick and more resistant to ionic activity. The result is a faster etching process that enables nearly vertical, and deeper, cuts.

With the support of Innosuisse (formerly CTI), the team plans to pursue its collaboration with Swiss synthetic diamond manufacturer Lake Diamond, with whom the team has filed a patent. "In the medium term this new technique will allow us to produce and commercialise precise micrometre components, and consequently to expand our field of activity", says Pascal Gallo, the company's CEO.

In a second project, the researchers are working to develop optical components from ultrapure diamond, such as lenses used in thermal imaging, which operate within the infrared spectrum, as well as laser components for industrial cutting.

"When my research project started in 2015, I never envisaged all the industrial applications", says Niels Quack. "But we quickly saw the potential of our work and succeeded in developing it into practical applications thanks to support from the Gebert Rüf Stiftung. For me, this is a perfect illustration of how basic research often results in applications that nobody predicted, but that are attractive to industry. It's important to keep an open mind!"

The research was carried out at EPFL under an SNSF Professorship – a funding scheme that has now been replaced by the SNSF Eccellenza Professorial Fellowhips. The work was also supported by the Gebert Rüf Stiftung and Lake Diamond at Yverdon-les-Bains (VD), which provided the synthetic single-crystal diamonds. The company's founder and CEO, Pascal Gallo, is a co-author of the paper. The components were fabricated at the Centre for MicroNanoTechnology at EPFL.