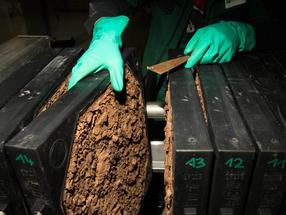 Using ultrapure lignin from the lignocellulosic biorefinery at the Fraunhofer Center for Chemical-Biotechnological Processes CBP in Leuna, researchers at the Technical University of Hamburg-Harburg (TU HH) have produced lignin-containing aerogels and processed high-porosity insulating boards with excellent insulation properties. The lignin was recovered from beech residual wood at the Fraunhofer CBP using the Organosolv process.

Lignin is one of the main components of woody plant parts. Embedded in the plant cell wall, the complex organic matter gives the wood its compressive and breaking strength. So far, lignin is mainly as - contaminated with sulfur - by-product in paper and pulp production available.

With the organosolv process developed by Fraunhofer, lignocellulose, the structural material of wood, is fractionated into its basic constituents only with water and alcohol. Among other things, high-purity lignin is produced, which can also serve as a valuable raw material for chemical industries. At Fraunhofer CBP, the process was successfully transferred to pilot scale four years ago and will be further developed in the other project projects. In the project "Substance Use of Lignin: Nanoporous Materials", which is funded by the Federal Ministry of Food and Agriculture (BMEL) through the project agency Fachagentur Nachwachsende Rohstoffe e. V. (FNR), the Fraunhofer CBP supplied high quality organosolv lignin.

"We fractionate the wood into its main components, lignin, hemicellulose and cellulose, by boiling it with water and alcohol at high temperature and high pressure, almost like in a pressure cooker," says Dr. Moritz Leschinsky, group manager at the Fraunhofer CBP. The lignin and hemicelluloses dissolve in the liquid while the fibrous cellulose remains firm. In a second step, the scientists extract the lignin from the liquid by cutting it and separating it. After removal of the alcohol, the hemicellulose sugars remain. If necessary, the solid, fibrous cellullose residue is, if necessary, mixed with enzymes and saccharified, that is to say cleaved into individual glucose molecules.

Lignin-based aerogels as the basis for highly porous insulation boards

The lignin can be used for biomaterials or used as a binder for the wood industry. Because of the chemically interesting structures, researchers at Fraunhofer CBP are also pursuing approaches to extract aromatic raw materials from the complex natural product. The cellulose obtained, broken down into its sugar components, is used, for example, as "food" by microorganisms. Thus, also at the CBP, fermentations with lignocellulose sugar, bio-based acids or fuels are produced.

The production of new materials - so-called aerogels - from this Organosolv lignin was successfully demonstrated by the TU Hamburg-Harburg.