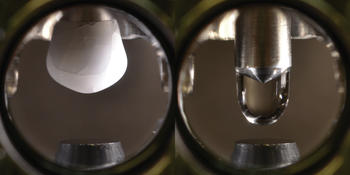 The ultraclean icicle (left) and the droplet, after melting.

What effect does water have on ultra-clean surfaces? Using a novel method, researchers at TU Wien and Cornell University have succeeded in demonstrating that smallest impurities can have a surprising effect.

In nature there is no such thing as a truly clean surface. Contact with normal air is sufficient to coat any material with a thin layer of molecules. This “molecular dirt” can change the properties of the material considerably, yet the molecules themselves are difficult to study. Some have speculated that this “dirt” is simply a single layer of water molecules. To test this idea, a new investigation method has been developed at TU Wien: by creating ultra-pure ice in a vacuum chamber, and then melting it, researchers could create the world’s cleanest water drops, which were then applied to titanium dioxide surfaces.

With this method, the researchers have shown that the “dirt” changing the properties of titanium dioxide surfaces is a single-molecule-thick layer of two organic acids: acetic acid (which makes vinegar sour) and its close relative, formic acid. This is surprising, because only minute traces of these acids are found in air. These results and the details of the new method were recently published in the journal ‘Science’.

Titanium dioxide (TiO2) is an abundant mineral that plays an important role in a wide range of technical applications, including self-cleaning surfaces. For example, a thin layer of titanium dioxide prevents mirrors from fogging up in moist air.  Using very powerful microscopes, researchers around the world observed an unknown molecule attaching to titanium dioxide surfaces when they came in contact with water.

The idea has been proposed that these molecules were a new type of water ice or perhaps soda water formed from carbon dioxide in the air. The correct answer is much more interesting: as the research team discovered, these structures are actually two organic acids, acetic acid and formic acid. These acids are by-products of plant growth. Remarkably only tiny traces of these acids occur in the air - a few acid molecules per billion air molecules. Although many other molecules are more common in air, it is these two acids that stick to the metal oxide surface and change its behaviour.

Ultra-pure water in a vacuum

“In order to avoid impurities, experiments like these have to be carried out in a vacuum,” says Ulrike Diebold. “Therefore, we had to create a water drop that never came into contact with the air, then place the drop on a titanium dioxide surface that had been scrupulously cleaned down to the atomic scale.” This task was made even more difficult by the fact that water drops evaporate extremely quickly in a vacuum, regardless of the temperature.

The researchers thought up an ingenious new investigation method. Their solution was to make a ‘cold finger’ in their vacuum. The tip of this metal finger is cooled to around -140°C and ultra-pure water vapor is then allowed to flow into the chamber. The water freezes on the tip of the cold finger, producing a small, ultra-clean icicle. The titanium dioxide sample is then placed beneath the finger. When the icicle melts, ultrapure water drops on to the sample.

Organic acids are to blame

The surface was then investigated using high-powered microscopes, but the scientists saw no traces of the unknown molecules using ultrapure water. Even when they made soda water with carbon dioxide, the strange “dirt-layer” was not found . This means that the molecules must come from something other than water or carbon dioxide.

Only when the sample is brought into contact with air do the strange  molecules appear. Interestingly, the same molecules were observed in different parts of the world – in urban Vienna and in a rural part of the United States. Chemical analysis showed they were simple organic acids typically produced by plants.

“This result shows us how careful we need to be when conducting experiments of this kind,” says Ulrike Diebold. “Even tiny traces in the air, which could actually be considered insignificant, are sometimes decisive.”

The results of the research work have been published in the prestigious journal ‘Science’. In addition to TU Wien, Cornell University (New York, USA) was also involved in the project.