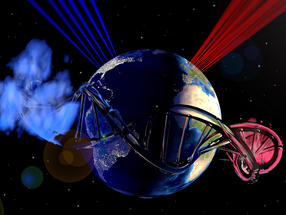 Researchers from around the world established a benchmark for the FRET technology by measuring distances within DNA molecules with sub-nanometer precision.

A worldwide study involving 20 laboratories has established and standardized a method to measure exact distances within individual biomolecules, down to the scale of one millionth of the width of a human hair. The new method represents a major improvement of a technology called single-molecule FRET (Förster Resonance Energy Transfer), in which the movement and interaction of fluorescently labelled molecules can be monitored in real time even in living cells. So far, the technology has mainly been used to report changes in relative distances – for instance, whether the molecules moved closer together or farther apart. Prof. Dr. Thorsten Hugel of the Institute of Physical Chemistry and the BIOSS Centre for Biological Signalling Studies is one of the lead scientists of the study, which was recently published in Nature Methods.

FRET works similarly to proximity sensors in cars: the closer the object is, the louder or more frequent the beeps become. Instead of relying on acoustics, FRET is based on proximity-dependent changes in the fluorescent light emitted from two dyes and is detected by sensitive microscopes. The technology has revolutionised the analysis of the movement and interactions of biomolecules in living cells.

Hugel and colleagues envisioned that once a FRET standard had been established, unknown distances could be determined with high confidence. By working together, the 20 laboratories involved in the study refined the method in such a way that scientists using different microscopes and analysis software obtained the same distances, even in the sub-nanometer range.

“The absolute distance information that can be acquired with this method now enables us to accurately assign conformations in dynamic biomolecules, or even to determine their structures”, says Thorsten Hugel, who headed the study together with Dr. Tim Craggs (University of Sheffield/Great-Britain), Prof. Dr. Claus Seidel (University of Düsseldorf) and Prof. Dr. Jens Michaelis (University of Ulm). Such dynamic structural information will yield a better understanding of the molecular machines and processes that are the basis of life.