Why geckos can stick to walls 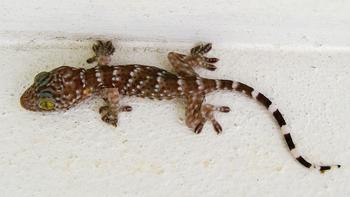 It enables geckos to adhere to walls and ceilings, is involved in the formation of membranes in cells as well as in the docking of drugs to enzymes in the human body. Dispersion, i.e. the "weak interaction", is omnipresent in chemistry. A team of scientists at Jacobs University Bremen headed by Dean and Chemistry Professor Dr. Werner Nau has now succeeded for the first time in experimentally quantifying the "London Dispersion", named after the German physicist Fritz London, in solution.

The scientific work on the project started more than three years ago and dates back to a priority program of the German Research Foundation (DFG) in which working groups from various universities throughout Germany are involved. In addition to the University of Leipzig and the Karlsruhe Institute of Technology (KIT), scientists from the USA, Israel and England were also involved in the research project. The international cooperation was coordinated by Jacobs University, where the groundbreaking experiments were also carried out.

"It was a particular challenge to distinguish the dispersion interaction from other interactions," says Nau. This is easy to distinguish between attractive and repulsive effects, but difficult for effects within a group. There are a number of competing attractive interactions such as electrostatic or hydrophobic ones. The scientists have developed a system that allows their differentiation. "By using noble gases such as helium, neon and xenon, we were ultimately able to isolate the dispersion force," explains Nau.

These findings from basic research are important, for example, in the development of new drugs or for hydrogen storage materials. It has also been discovered that an interaction that has so far received little attention, namely the energy required to displace solvent molecules, plays a much more important role than previously thought.

The scientific journal "Nature Chemistry", published in Great Britain, is regarded as one of the most important and respected publications in its field. Nau and his team are continuing their research on dispersion, and this year the DFG project was extended once again, now covering two funding periods with a total volume of more than 600,000 euros. The future focus will also be on systems for binding methane using dispersion, which in turn is important for the next generation of energy-storage technologies.