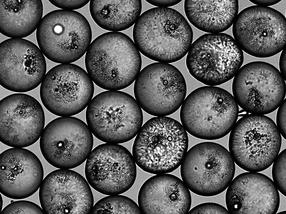 ETH researchers have developed a process with which they can specifically stabilize emulsion droplets with a certain amount of particles.

The surface of the oil droplet in water is covered with particles by 40.8 percent as desired.

ETH material researchers are developing a method with which they can coat the droplets with controlled interfacial composition and coverage on demand in an emulsion in order to stabilise them. In doing so they are fulfilling a long-held dream of researchers and industry.

Mayonnaise is a prime example of an emulsion that consists of a water phase and an oil phase. Oil and vinegar are mixed to form countless droplets. Egg yolk is added as an emulsifier that coats the surface of the droplets, and thereby acts to stabilise them. Done correctly, a fine, creamy mixture is formed. If the oil is added too quickly (or at the wrong time), the mayonnaise congeals: the droplets aren’t stable enough, they dissolve, and the phases separate.

So far materials researchers have had just as much trouble as amateur chefs have trying to make the perfect mayonnaise in producing controlled interfaces of droplets in two-phase mixtures with stabilisers or emulsifiers. These “reinforced” interfaces are important because they stabilise the droplets and ultimately the respective emulsion. Until now, researchers have not managed to successfully regulate either the extent of the particle coverage or the composition of the particles in the interfaces of such droplets.

But this “mayonnaise puzzle” may have been solved: materials researchers from ETH Zurich and the Belgian University of Leuven (KU Leuven), working under the direction of Professor Jan Vermant of ETH, have developed a new method with which they can target the droplet interfaces in emulsions in order to coat and design them with the most diverse particles.

“Using the classical approach – mixing two liquids with an emulsifier, shaking and seeing the result – it’s impossible to arrange defined quantities of an emulsifier in the interface of the droplets,” emphasizes Vermant. “There’s an element of chance.”

With the new method it’s now possible to calculate in advance and set the quantity of particles required to achieve the right degree of coverage. The researchers have also found arbitrarily many different options for which particles they intend to use and what size they can have. Spherical silica particles are most commonly used, but for the testing they also used worm or rod-shaped particles. Proteins and polymers are now also options for use as emulsifiers.

“This approach opens up unimagined opportunities which we can use to create new materials,” says the ETH professor Vermant.

Their method is based on a microfluidic platform the size of a microscope slide. The researchers can produce tiny droplets by using this platform. While the droplets are forming, the second phase starts with the particles which attach themselves to the droplet interfaces.

The quantity of particles is controlled by the researchers using the flow velocity with which the particle phase moves through the developing droplets. Finally, this layer is surrounded by the phase in which the droplets come to rest (water in the case of oil droplets, or vice versa).

Depending on the intended purpose, the droplets can be covered with various types of particles. The researchers can also use particles of different sizes, various chemical compositions or even different polarities (hydrophobic vs hydrophilic).

The individual droplets can coalesce depending on the degree of coverage. This results in peanut-like shapes. The coalescence changes the ratio of volume to surface area, which means that there is less space available for the particles on the interface. The particles covering two droplets are forced to move together on a smaller area, and the coverage of the double droplet increases in density. The coated droplets are stabilised in this way – and so is the emulsion, whose properties also derive from the shape and length of the droplets.

“We can also determine the shape of the droplets using our method, allowing us to create emulsions with previously inconceivable properties”, enthuses Vermant. The newly discovered principle is very robust. “We’ve been working on this for ten years, and now the problem is solved.”

The method described here is only suitable for research because it only works on a very small scale. However, the ETH researchers are working on scaling it up to process larger quantities. They are developing an apparatus that would already be suitable for industrial testing methods based on the sale and the throughput.

On an even larger scale, applications in the food, pharmaceutical, cosmetics and even the oil industry, for example separating oil and water during oil extraction, would be possible.