Electrons use the zebra crossing

Exotic Patterns of interacting electrons at the metal-insulator transition 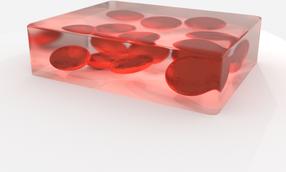 By examining the polarization of reflected light in vanadium dioxide the scientists from Stuttgart revealed the formation of sub-micrometer-size metallic droplets.

Since high school we know that matter appears in three different phases (solid, liquid, gas); yet the microscopic details about the transformation from one state to the other puzzles physicists until now. An international team of scientists led by Prof. Martin Dressel from the Institute of Physics (1) at the University of Stuttgart gained fascinating insights in electronic phase transitions by applying novel optical techniques.

The change of correlated electrons from metallic to insulating is very similar to the freezing of water into ice, i.e. transforming from liquid to solid. Since the structures at such a phase transition are typically smaller than the wavelength of visible light, it is not possible to see them by a conventional microscope. A near-field microscope, however, utilizes an atomically thin metallic tip scanning above the material’s surface to record the local optical properties. By combining such an apparatus with the capability to reach cryogenic temperatures, the physicists from Stuttgart could monitor for the first time the metal-insulator transition of a molecular crystal on the nanometer scale at temperatures as low as -138°C. They discovered a peculiar pattern of alternating metallic and insulating regions, reminiscent of the black and white fur of a zebra. The stripes have a width of less than one micrometer and occur due to the interplay of tension and strain within the crystal coupled to anomalous thermal expansion. The pattern of electronic inhomogeneity and its gradual evolution with changing temperature can be nicely modeled by a mathematical simulation.

A similarly exotic pattern of electrons was also observed in a completely different material with a metal-insulator transition: vanadium dioxide shows a sudden drop of electrical resistance when heated from room temperature above 70°C. By examining the polarization of reflected light the scientists from Stuttgart revealed the formation of sub-micrometer-size metallic droplets. They are spherical in shape and keep growing in size until they make contact at the phase transition. Cooling down again, the polarization is different from the warm-up cycle indicating that metallic regions form oblate ellipsoids, i.e. disks that become smaller in density and size until they vanish in the insulating phase; just like the melting of ice. Although a complete theoretical understanding is pending, there is evidence for a crucial influence of the layer thickness on the shape of metallic droplets.

It seems that the Stuttgart group has discovered a completely new facet of electronic materials that exhibit fascinating patterns formed by interacting electrons.