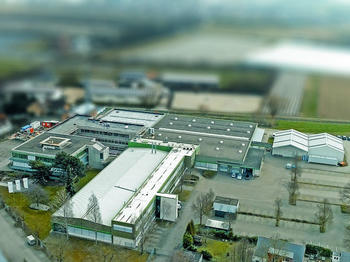 Numerous guests gathered in the district of Munzingen, Freiburg for the topping-out ceremony on March 15, 2019. Together with the construction companies and architects carrying out the project, the staff and management of KNF Neuberger GmbH celebrated the end of the second stage of construction for the new building, which will house administrative offices and additional production areas.

The speech at a German topping-out ceremony is traditionally concluded by smashing a glass for good luck. The CEO of KNF Neuberger, Günter Emig, and the site manager Mr. Layer rose to the occasion with a well-received joint speech. They thanked the tradespeople and planners in attendance for the successful completion of the building shell, in front of KNF’s staff, Munzingen district council and the company owners, the Becker family.

The long-awaited new building is a further milestone in KNF’s success story. The company’s production areas will total 5,000 m2 once the project is completed, which should be later this year. The company is enjoying dynamic growth as it skillfully capitalizes on the opportunities created by digitalization. Its employees actively contribute to the continuous advancement of the company by driving improvements to operations themselves. KNF already uses a robot in CNC manufacturing. The company wants to make use of its new space to exploit the possibilities of Industry 4.0 more systematically. The work spaces will be structured based on the latest lean management approaches and kitted out with state-of-the-art technology. This will allow to work even more ergonomically and efficiently.

The family-owned Freiburg company has invested more than 5 million euros in the expansion of its location in Freiburg-Munzingen. The existing administrative building is set to be renovated following the completion of the new build.