How to free the trapped radicals from the carboxyl? 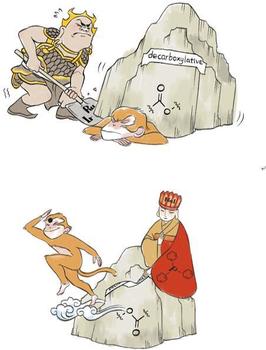 Free radical, the Monkey King is bound by the "big mountain" of the carboxyl group. The mainstream photocatalytic systems are complex and costly. The novel catalyst uses a new mechanism to combine the cheap catalyst with the carboxyl group, pushes the redox reaction cycle, and easily sets free the "free radicals".

The removal of carboxyl groups and the release of alkyl radical fragments from the tight binding of carboxyl groups are one of the most interesting and promising directions in organic synthesis, especially in the field of new drug synthesis. Scientists around the world designed various catalysts try to solve this challenge. Young scientists from University of Science and Technology of China has made a big step forward developed a cheap and simple catalyst system.

The free radical is versatile and controllable, representing a "Great Holy" in organic synthesis, but it is pressed by the "big mountain" of the carboxyl group. Carboxylic acid compounds makes up many familiar and important substances in our life and industrial production, such as the amino acids, acetic acid, and vinegar. The free radical fragment that is released from the carboxylic acid compounds is of great use in the industry of the materials, pharmaceuticals, and the other fields. Conventional decarboxylation processes are often carried out at elevated temperatures, which produces a large number of various unknown products, limiting their industrialization.

In recent years, the scientific community has tried to use photocatalytic reaction to achieve decarboxylation conversion, using light to excite electron transitions to generate free radical fragments for chemical bond cleavage and recombination under mild conditions. Compared with the traditional heating method, photocatalysis has many advantages, including simple operation, easy control, energy saving and environmental protection. The photocatalytic system has been successfully applied to the synthesis of various complex functional molecules, exhibiting outstanding catalytic synthesis value and the potential of industrial application.

However, most photoredox catalysts in current use are composed of precious metal complexes (such as Iridium and ruthenium) or are synthetically elaborate organic dyes with complicated structures. This makes the photocatalytic industrial system costly, complicated in process, and difficult to control. Therefore, the development of new cheap and multifunctional photocatalytic systems has become an important direction for future development. The existing major types of photocatalytic systems are complex and costly. The new catalyst has a new way to use a new mechanism to combine the cheap catalyst with the carboxyl group, push the redox reaction cycle, and easily and freely rescue the "free radicals".

The research team of University of Science and Technology of China proposed a new concept based on visible light excitation for intermolecular charge transfer to construct a catalytic redox cycle for organic synthesis. A simple, easily available, highly efficient and non-metallic anionic composite photocatalytic system was discovered for decarboxylative reaction of carboxylic acid derivative.

The proposed catalytic system simultaneously drives a redox cycle, simplifies the photocatalytic system, and reduces the cost of the photocatalyst, breaking through the limitations of traditional heating method, and solving the problems of transition metals remaining in the synthesis of functional compounds and drugs. Using this system, redox-active esters derived from various natural and unnatural amino acids successfully triggered decarboxylativr coupling reactions with high efficiency and gram scale production, indicating the feasibility of industrialization. It is also expected to promote the scale industrialization of photocatalytic technology in the production of important functional molecules, with important synthetic chemical value and good industrial application prospects.

The reviewers highly valued this work: " The results are interesting, and may initiate a new area of research in photoredox catalysis by introducing a tricomponent system based on a salt, a phosphine and an electron- acceptor to access redox active complexes without the need for traditional transition metal or complex dye catalysts. ", "This work gives us a very interesting concept; decarboxylative alkylation is accomplished without precious transition metals or organic dyes, which may be good news for many synthetic chemists."