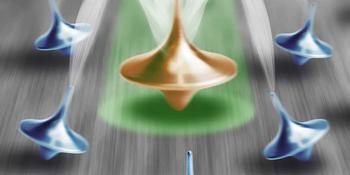 To measure the precession a carbon nucleus, the ETH Zurich researchers used the spin of a neighbouring defect in the crystal lattice as a sensor.

In recent decades, NMR spectroscopy has made it possible to capture the spatial structure of chemical and biochemical molecules. Now researchers at ETH have found a way to apply this measurement principle to individual atoms.

Nuclear magnetic resonance spectroscopy – NMR spectroscopy for short – is one of the most important methods of physicochemical analysis. It can be used to precisely determine molecular structures and dynamics. The importance of this method is also evidenced by the recognition of ETH Zurich’s two latest Nobel laureates, Richard Ernst and Kurt Wüthrich, for their contributions to refining the method.

The technique is based on nuclear magnetic resonance, which takes advantage of the fact that certain atomic nuclei interact with a magnetic field. A key factor here is the nuclear spin, which can be compared with the spinning of a child’s top. Similar to a top that begins to wobble – experts call this precession – nuclear spins that are exposed to a magnetic field begin to precess. This generates an electromagnetic signal that can be measured using an induction coil.

A team of researchers led by Christian Degen, Professor of Solid-State Physics at ETH Zurich, has developed a new approach, making it possible to directly track the precession of single nuclear spins. In comparison: conventional NMR measurements usually require at least 1012 to 1018 atomic nuclei in order to register a measurement signal.

In their project, the ETH researchers analysed the behaviour of carbon-13 atoms in diamonds. Rather than using conventional methods to measure the precession of the carbon nucleus, they used the spin of an adjacent electron in an N-V centre – an imperfection in the diamond’s crystal lattice – as a sensor. Kristian Cujia, a doctoral student in Degen’s group, summarises the principle thus: “We use a second quantum system to study the behaviour of the first quantum system. In this way, we created a very sensitive way of measurement.”

Quantum systems are hard to pin down, as any measurement will also influence the system being observed. Therefore, the researchers were unable to track the precession continuously; its movement would have been changed too drastically. To solve this problem, they developed a special measurement method to capture the spin of the carbon atom through a series of weak measurements in quick succession. As a result, they were able to keep the influence of their observation so small as to not influence the system measurably, leaving the original circular motion perceptible.

“Our method paves the way for remarkable advances in NMR technology,” Degen explains. “This potentially enables us to directly record the spectra of individual molecules and analyse structures at the atomic level.” As a first example, the physicists identified the three-dimensional position of the carbon nuclei in the diamond lattice with atomic resolution. The physicists see huge potential in this development. Such detailed NMR measurements could lead to completely new insights in many areas, as has already been the case with conventional NMR spectroscopy in recent decades.”