The numerical devices of artificial intelligence 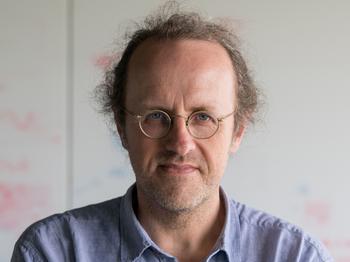 The 2019 Körber European Science Prize, endowed with one million euros, is to be awarded to the German physicist, mathematician and computer scientist Bernhard Schölkopf. He has developed mathematical methods that have made a significant contribution to helping artificial intelligence (AI) reach its most recent heights. Schölkopf achieved worldwide renown with support-vector machines (SVMs). These are not machines in the classical sense, but sophisticated algorithms (program instructions) with which computers can perform highly complicated AI calculations quickly and precisely.

Bernhard Schölkopf, 51, is a pioneer of this new industrial revolution based on information. After studying physics, mathematics and philosophy in Tübingen and London, the Stuttgart native went on a scholarship to the American Bell Labs, where his subsequent PhD supervisor Vladimir Vapnik was just beginning to conduct research into SVMs. In 1997, Schölkopf received his doctorate in computer science from the TU Berlin. He already contributed decisively to the development of SVM technology to application maturity in the Vapnik team. After working in Cambridge, England, and at a New York biotech start-up, Schölkopf became Director of the Max Planck Institute (MPI) for Biological Cybernetics in Tübingen in 2001. In 2011, he was one of the founding directors of the MPI for Intelligent Systems in Tübingen.

Although almost everyone comes into contact with it on a daily basis, around half of Germans do not know what exactly is meant by the term "artificial intelligence". "AI is in play when a smart phone automatically groups stored photos according to faces and topics such as holidays," explains Schölkopf, "or translates texts from one language into another."

AI is currently experiencing a global boom, not least because of its growing economic importance. The USA and China are investing billions in this technology, which is likely to fundamentally change working life throughout the world. Even before the turn of the millennium, intelligent robots were moving into factories on a large scale, for example in the automotive industry. In the future, intelligent systems will increasingly take over routine tasks in offices.

The support-vector machines co-developed by Bernhard Schölkopf are similar to neural networks modelled on the brain, but provide more precise results for some tasks. In addition, they are based on solid mathematical principles, which makes their mode of operation more transparent. SVMs initially need to be trained, just as the human brain does when learning. Their special attribute is that their algorithms make clean-cut classifications in mathematical spaces of higher dimensions, but the computer can do this with comparatively simple and fast calculations.

The first SVM systems from the 1990s were able to recognise handwritten numbers on letters almost as well as humans and were better than any competing systems. They also gave a significant boost to computer science because of their systematic mathematical approach. Schölkopf is today's most frequently cited German computer scientist and, according to the research magazine "Science", ranks among the ten most influential computer scientists in the world.

The Schölkopf team at the MPI Tübingen is currently investigating algorithms that can also identify causal relationships from data. This promising new field of research is referred to as causal inference. One of its goals is to make AI systems more robust against interference. "If, in a built-up area, a 30 km/h speed limit sign has been pasted over in such a way that it looks like a 120 km/h sign, then the AI system of a driverless car must be able to infer from the context that this sign is to be ignored," says Bernhard Schölkopf.

Another of Schölkopf's concern is to help Germany achieve a leading position in the tough international competition for AI. He is co-founder of the world-renowned "Cyber Valley" in the Stuttgart-Tübingen region – a centre of excellence funded by the state of Baden-Württemberg that has also been able to integrate leading American companies. As part of the planned ELLIS programme (European Laboratory for Learning and Intelligent Systems), Schölkopf hopes to "better network leading European locations, set up joint programmes and train doctoral students. Young top researchers should not have to go to the USA to work at the highest level". In addition, it is important to have even more extensive state AI funding. Schölkopf intends to use the funds of the Körber Prize in his Causal Inference area of expertise and for workshops to promote the ELLIS project.

The Körber European Science Prize 2019 will be presented to Bernhard Schölkopf on 13 September in the Great Festival Hall of Hamburg City Hall. To mark its 60th anniversary, the Körber Foundation is increasing the prize endowment to one million euros as of this year. This makes the Körber Prize one of the world's most highly endowed research prizes. "We want to set an example for the recognition of top-class research in Europe," says Dr. Lothar Dittmer, Chairman of the Executive Board of the Körber Foundation, "and with our new stipulation that five percent of the prize money is to be used for science communication, we want to contribute to this recognition also growing in the public sphere." Every year since 1985, the Körber Foundation has honoured a major breakthrough in the physical or life sciences in Europe. The prize is awarded to excellent and innovative research approaches with high application potential. To date, six prize winners have also been awarded the Nobel Prize after receiving the Körber Prize.